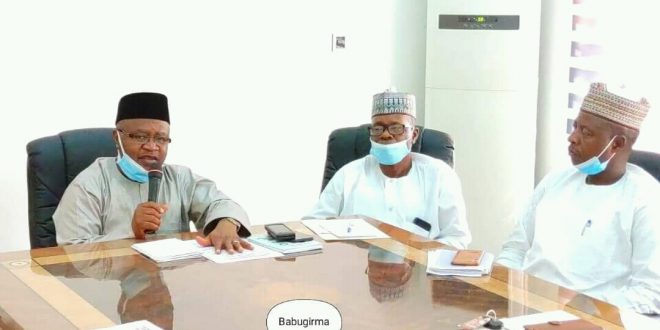 “To submit report within 4 weeks

Governor Bala Abdulkadir Mohammed of Bauchi state on Monday constituted a high powered committee to work out modalities of stabilizing the payment of salaries and pensions in the state.

The Chief of Staff, Government House Bauchi, Dr Ladan Salihu announced this while briefing journalists on the outcome of a meeting between the governor and the leadership of organized labour in Bauchi state held at Ramat House, Bauchi.

Dr.Ladan Salihu said the committee will also work on the establishment of a credible nominal and payroll system in the state as part of Governor Bala Mohammed’s desire to bring to an end, the lingering problems associated with the payment of salaries and pensions.

According to him, with the constitution of the committee, the governor has shown strong commitment towards addressing the plight of workers in the state who were affected as a result of ongoing reforms in the civil service.

“Let me on behalf of His Excellency, the Executive Governor of Bauchi state, Senator Bala Abdulkadir Mohammed address you on the outcome of a meeting chaired by the Governor with the leadership of organized labour in the state.”

“I am happy to inform you and indeed the entire people of Bauchi state that all the issues raised by the labour leadership were discussed extensively during the meeting and agreed upon.”

The Chief of Staff said to be chaired by the state’s Deputy Governor, Senator Baba Tela with Secretary to the State Government, Alhaji Sabiu Baba as secretary, the committee has four weeks to submit its report.

Dr.Ladan Salihu assured that, the administration of Governor Bala Mohammed will continue to work with the organized labour to advance the state’s public service through various initiatives and payroll system in particular.

“With the profile of the personalities appointed to serve in the committee, you will agree that, His Excellency, the Governor is determined to find solutions to all lingering issues.”

On his part, the Chairman of NLC in Bauchi state, Comrade Danjuma Saleh said with the resolutions reached at the meeting, the leadership of organized labour will look at the possibility of suspending the proposed industrial action scheduled for tomorrow, the 23th of this month.

“Today as you can see, His Excellency, the Executive Governor of Bauchi state, Senator Bala Abdulkadir chaired a joint meeting with us and we are happy to say that the meeting is fruitful because of the level of commitment of the government on all the issues we identified.”