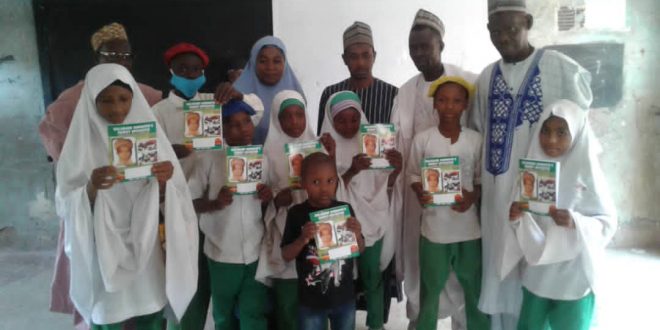 The renowned Balarabe Goronyo family, domiciled at the Kofar Bai Area, in Sokoto Metropolis, has donated over ten thousand exercise and textbooks to Indigent pupils of the Premier Waziri Model Primary School.

The historic event was successfully organized on Monday ,at the school , to mark the International Book Giving Day, 2021, as well as in remembrance ofvthe Progenator of the family, the late Alhaji Balarabe Goronyo.

Apart from 10,000 exercise books, assorted textbooks on English, Mathematics, Arabic and Islamic Religious Knowledge were also doled out to the benefitting pupils, who were drawn from Nursery one to Primary six. 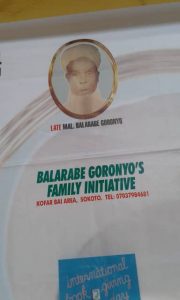 Professor Junaidu also called for collective efforts in funding education, even as he described pupils and students as collective assets of the society .

” All hands should be on the deck in ensuring adequate funding for efucstion, at all levels.

” There is population explosion now , globally, coupled with raging economic down turn, across the world , hence , more of this lofty gesture should be replicated and emulated by all and sundry,”the retired University Don, urged .

The Spojesperson of the family, Alhaji Bala Balarabe Goronyo, described education as the elixir of life , adfing, ” No society develops without education . Education is both formal and informal . 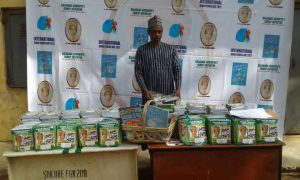 ”  Instructively, there can be no effective teaching and learning without the requisite books.

” The importance of books to bolstering the above cannot therefore in anyway be under estimated .

“This brings to the fore, the imperative of ensuring that , pupils and students , at all levels, globally, have unfettered access to books , all forms of books, indeed.

The donor, Alhaji Zayyanu Aliyu Balarabe Goronyo, said that , the  donation of the books wad part of numerous other charitable acts being undertaken by the family.

He happily  recalled that , the family had in the most recent  past sponsored free medical outreaches, that were successively conducted for the indigent residents of Galadunchi and its environs .

He explained: ” These acts are just part of our widow’s mite , to extend our helping hands to our less privileged kiths and kins, as we have been ordained by the Almighty Allah.”

Zayyanu further stated that, the gesture was part of efforts of doing their own possible best, to pay back to their alma mater .

The Headmaster of the school , Alhaji Nasiru Shehu Bazza, lauded the gesture and promised the judicious distribution of the books .

Spokespersons of the pupils, Mudassiru Hussaini and Farida Sanusi, said that, they were elated as the books would bolster their pursuit of education.