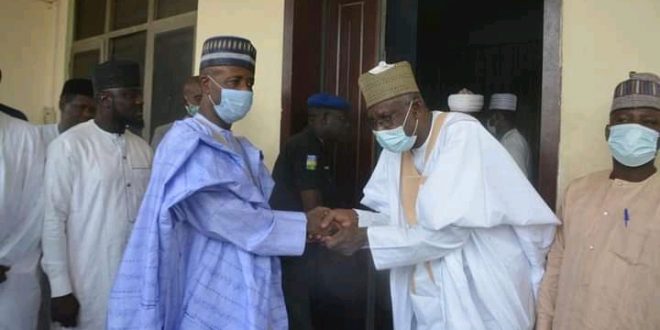 The Chairman of the Senate Committee on Defence and Deputy Chairman,Senate Committee on Anti Corruption,Senator Aliyu Magatakarda Wamakko, has felicitated with a former Member of the House of Representatives, who represented Sokoto North and South Federal Constituency, Alhaji Bala Hassan, Durunbun Sokoto,on his appointment as a Special Assistant to the Senate President,Dr Ahmad Ibrahim Lawan.

Wamakko said that, he was excited with the very happy development as the Durunbun Sokoto who had held many crucial positions, hitherto, is a tested and trusted seasoned Technocrat.

According to the former Governor of Sokoto State:” He is a highly reliable and meticulous personality, whose huge wealth of experience will add value to the administration of the Office of the Senate President.

” I am sure, in Sha Allahu, he will be found worthy of being trusted with this new all-important responsibility and he will justify the confidence reposed in him.

” I am therefore beseeching the Almighty Allah to protect and guide him aright in this ardous responsibility .

” He has been a strong pillar of the All Progressives Congress ( APC), as well as an active partner in our collective efforts to improve the living standard of the people of the state and Nigeria, in general .”