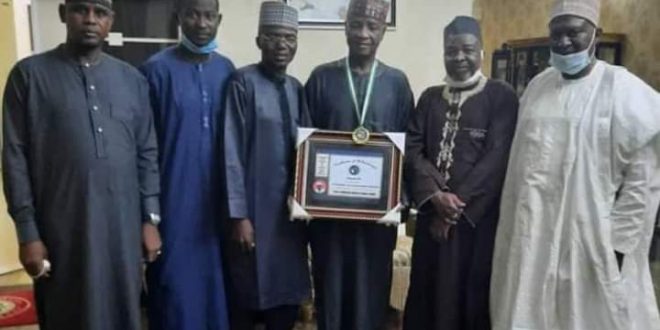 The Chairman of the Senate Committee on Defence and Deputy Chairman, Senate Committee on Anti Corruption, at the weekend, in Abuja , added another feather to his crowded cap as the West African Political Writers Asscociation bestowed an Award of Excellence as one of the Outstanding Senators of the Federal Republic of Nigeria on him.

Presenting the Award at a brief ceremony at his Asokoro residence Abuja, the Actng President of the Association, Musa Mohammed, extolled some of the good virtues of Distinguished Senator Aliyu Magatakarda Wamakko, that informed their decision to confer the Award on him.

They include hard work, dedication, love for his people, selfless service, and above all, love for peace and unity of Nigeria.

In his response, Senator Aliyu Magatakarda Wamakko, who represents Sokoto North Senatorial District, thanked the Association for remembering his modest contributions to humanity.

Wamakko averred that, the invaluable gesture will motivate him to do more , to alleviate the suffering of the less privileged people