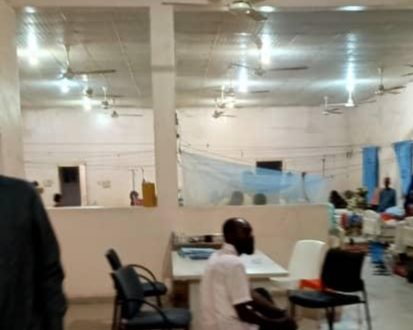 Less than 24 hours after a surprise visit by Governor Babagana Umara Zulum, a solar system as an alternative source of power, has been installed at Umaru Shehu Ultra Modern Hospital located around Bulumkutu axis in Maiduguri.

The system was installed on Saturday following a directive issued by Professor Zulum on Friday night when visited the hospital and met patients in darkness due to a blackout said to have been for a number of days.

Technicians of the State’s Ministry of Higher Education, Science, Technology and Innovation, carried out the installation under the directive of their Commissioner, Dr. Babagana Mustapha Mallambe, who first sought permission from his fellow Commissioner in charge of the Ministry of Health.

A power system with relevant number of batteries and solar panels was fully installed with lights restored.

More sustainable measures are expected to combine with the solar system.

It would be recalled that Governor Zulum around 10pm on Friday night, showed up unannounced at two hospitals in Maiduguri only to find patients in darkness due to power failure that had lingered for a number of days.

The Governor had just returned from Abuja and decided to drive from the airport straight to the hospitals, soon after he got a hint from private sources that the hospitals were under blackout for days.

Governor Zulum went to see things for himself and he confirmed patients were in darkness because there was lack of diesel supply to standby generators.

Both hospitals relied on generators because of lack of electricity supply from the national grid since Boko Haram destroyed electricity equipment along the Maiduguri-Damaturu highway, in response to which frantic efforts were still being made by Federal and State officials to restore connections to areas yet to have electricity, including parts of Bulumkutu axis.

Zulum, a Professor of Engineering, asked persons in charge of generators at both hospitals some technical questions, which led to his confirmation that the generators had no problems at all. They were fully functional but lacked diesel to power them.

“It is very unfortunate that no official either from the Hospital Management Board or the Ministry of Health drew my attention to this outage” the Governor queried.

“If we can power our streetlights constantly, I see no reason why we cannot power our hospitals” Zulum lamented as he consoled patients and their loved ones for being in darkness despite dealing with illnesses.

Wondering the quickest way to mobilize diesel, the Governor directed that available diesel meant to power generators at the Government House, Maiduguri, where he lives, be immediately transferred by trucks to both hospitals, pending his meeting with officials of the State’s Ministry of Health the following day, to find a sustainable solution.