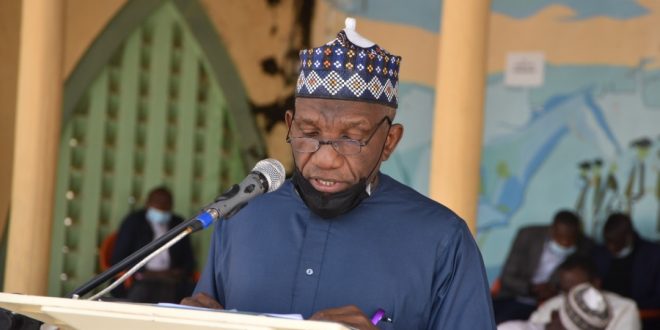 Ahmadu Bello University attracted additional funding amounting to over N10 billion in 2021 through various grants for infrastructure development across the University, the Vice-Chancellor, Prof. Kabiru Bala, has disclosed.
Ina statement Signed by the Public Affairs Directorate, Office of the Vice-Chancellor,
Ahmadu Bello University, Zaria made available to news men revealed that.
The Vice-Chancellor, who made the disclosure at the University’s 80th (Ordinary) meeting of Congregation held on Thursday, 20th January, 2022, stressed that efforts were being made to secure more grants for the University this year.
The Congregation, which was chaired by the Vice-Chancellor, was well attended, as several members who were away joined the deliberations virtually.
Giving a breakdown of the grants attracted for the University, the Vice-Chancellor said that five billion Naira (N5 billion) was secured as Presidential Special Intervention for development of Faculty of Allied Health Sciences, Department of Computer Engineering, Faculty of Dentistry and Department of Mechatronics.
Prof. Bala stated that the sum of one billion Naira (N1 billion) donated to the University by Abdul Samad Rabiu Africa Initiative for the construction and furnishing of one block of students hostel and a new structure for the Department of Building was also part of the grants secured last year.
He further said that the University got another one billion Naira (N1 billion) as Presidential Special Intervention for the establishment of Endourology and Kidney Transplant Facility and Next Generation Sequencing Facility for infectious diseases.
The Vice-Chancellor stated that the allocation by the Tertiary Education Trust Fund (TETFund) of N825 million for the construction and furnishing of two blocks of students hostel was also part of the grants.
Prof. Bala also disclosed that the University attracted the sum of N700 million Special Intervention for completion of its 1000-seat auditorium.
He expressed delight that ABU students and staff had continued to excel in national and international competitions, saying a student team from the Department of Chemical Engineering clinched 2nd position at the 2021 National Design Project Competition organised by the Nigerian Chemical Engineering Society.
A student team from the Faculty of Pharmaceutical Sciences won 1st position at the 2021 Competition organised by the Pharmacy Society of Nigeria, just as another student team from the Department of Computer Engineering emerged the best at the 2021 Innovation Competition organised by the Nigerian Society of Engineers, he said.
The Vice-Chancellor went further to disclose the grants won by academic staff of the institution from the Raw Materials Research and Development Council (RMRDC). 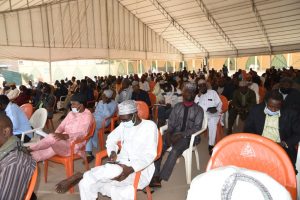 For instance, he said, a team headed by Mr. Muktari Suleiman of the Department of Polymer and Textile Engineering won a grant from the Council for the production of Prototype Nano Footwears from waste plastics and waste automobile tyres.
He said that another team headed by Prof. Fatai Anafi of the Department of Mechanical Engineering was given a grant by the Council for the design and production of continuous oxygen generator for COVID-19 patient management.
The Vice-Chancellor stressed that the University had, no doubt, recorded some success since 22nd April, 2021 when the 79th (Special) meeting of Congregation took place.
“But we must also admit that we were faced with funding and some other challenges which are incomparable to those faced in the past. These have, and will continue to threaten our core functions as a University. Therefore, we must rise to the challenge”, he said.
Prof. Bala, however, stated that the University Management would continue to be resolute in addressing these challenges and expressed confidence that members of the University and other key stakeholders would continue to support his administration in the discharge of shaping the future of the Institution.
“I had the firm belief that there is no challenge we cannot overcome, if we continue to embrace the spirit of openness, intellectual discourse, togetherness and team work. These have always been the pillars that support the essence of our existence”, Prof. Bala also said.
The Vice-Chancellor finally acknowledged the sacrifices made by members of the University community and other stakeholders in ensuring the smooth running of the University during these difficult and challenging times.
Share