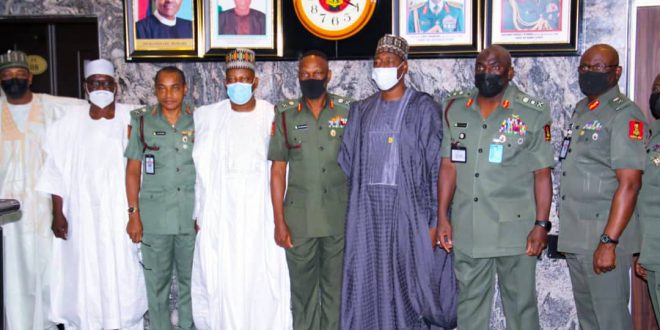 Borno State Governor, Babagana Umara Zulum, on Monday, led the senators representing the state at the national assembly, to visit the Chief of Defence Staff, General Lucky Irabor, and the Chief of Army Staff, Lt General Ibrahim Attahiru in Abuja. 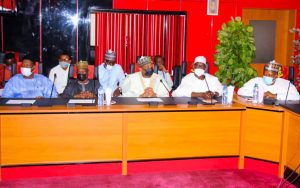 The visits were done separately and on each, discussion was held behind closed doors.

Before one of the closed-doors, Zulum paid an open courtesy call at the office of the army chief, thanking soldiers for their patriotism, sacrifices and commitment in the shared effort to restore peace in Borno.

The governor however called on the Nigerian military to bridge keep improving trust between the population, government and the military.

“We must do everything possible to improve on the trust between the population, government, and the military. We need to work together, one thing we should do is to ensure ongoing operations are sustained and farmers are able to return to their farmlands so that we reduce reliance of food aid that is not sustainable. We will give the military all the necessary support, and continue to interface with you, hoping this problem will be resolved within the shortest time” Zulum said.

Chief of Army Staff, Lt. General Ibrahim Attahiru commended Governor Zulum for his tremendous support to the military and described the visit as timely. He noted that such visit offer windows for productive exchange of ideas. 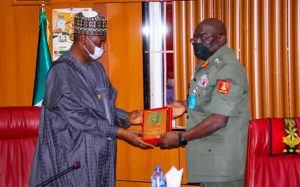 “I personally commend and appreciate Governor Zulum’s gestures to the Operation Lafiya Dole on medical assistance, food support, among others.

We note these support and we are grateful” the COAS said.

Attahiru assured the Governor that operational strategies were being enhanced in the fight against Boko Haram and other criminal activities.