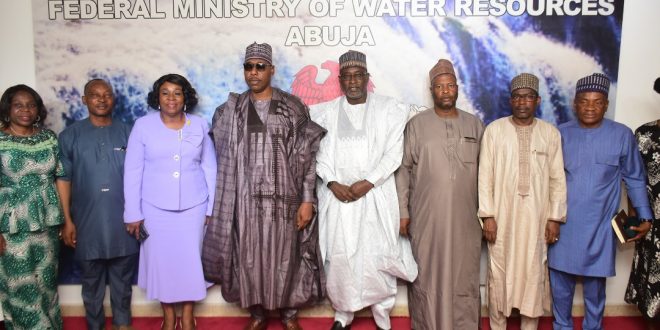 Borno State Governor, Engineer Babagana Umara Zulum, on Tuesday visited the Minister of Water Resources, Engineer Suleiman Adamu, at the ministry’s headquarters in Abuja.
During the meeting which lasted for about an hour, Zulum noted that  funds could be raised through collaborations with the United Nations regional stabilization facility, other foreign and Nigerian based development partners such as the Northeast Development Commission, as well as contributions from states within the Lake Chad region to start something towards recharging the Lake Chad Basin which was a source of livelihood for about 30 million people before it receded by 90%. 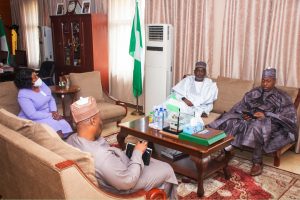 Speaking on Hawul River Basin, Governor Zulum, a professor of Irrigation Engineering, suggested the possible use of distilling and suppressing vacuum techniques to expand the capacity of the basin, promising Borno Government’s support for urgent measures considered by the Federal Government.
“At our own level, we are ever ready to provide the needed political will to thrive these important projects”, Zulum said.
Responding, the Water Resources Minister assured the governor of President Buhari’s commitment to reviving the Lake Chad. 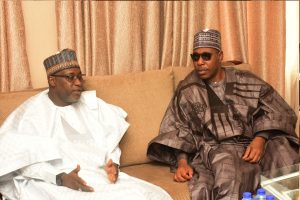 He also promised that the ministry will henceforth shift focus from executing fragmented projects to a strategic and ambitious one that can make massive impact on the lives of people in Borno and rest of the Lake Chad region.
Governor Zulum was accompanied by the State Commissioner of Agriculture and Natural Resources, Engr. Bukar Talba.
Share