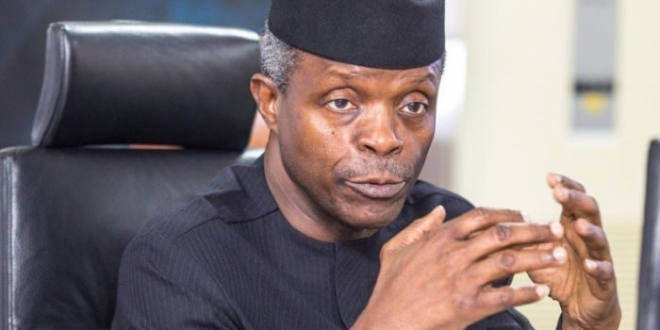 Nigeria is stronger together than apart, says Osinbajo

Nigeria is stronger together than apart, says Osinbajo

Osinbanjo spoke in Sokoto, on Friday, when he delivered the Convocation Lecture at the Sokoto State University, Sokoto, with a Theme:” Nigeria: Some Defining Issues For the Future.”

According to the Vice President, the ethnic , cultrual and religious diversities of Nigeria should be it’s uniting factor, and not a divisive one.

Osinbajo added:” Our various differences should provide more opportunities for us to be more united .

” Nigerians must establish the culture of tolerance , as there is a Nigerianness binding us together.”

The Vice President also chided at some enthusiasts of division who have been trying to mobilize the followership along religious and ethnic lines.

He lamented that, those pundits of division were largely hinging their obnoxious actions on the national cake that is drastically reducing .

Osinbajo also noted that, Nigeria was abundantly blessed with myriad of potentials, adding ,” we have everything it takes to provide for all Nigerians, including generations yet unborn, inspite of the various challenges facing the nation.”

On security, the Vice President stressed the need for Governors to be more committed to ensuring the arrest and prosecution of all perpetrators of crimes.

He also said that, the time has come for the decentralization of policing in the country , with the states and the local governments as the focal points .

Osinbajo further said that, there was the need to expand the capacity of the state to react to the large and wide ungoverned spaces in the country .

He lamented that, those ungoverned spaces that were hitherto more safer and secure were now soft targets of bandits and other criminal elements .

Osinbajo also recalled that, President Muhammadu Buhari, had while decorating the new Service Chiefs recently, challenged them on this disturbing trend ,among several other thorny issues issues .

He also spoke extensively on other criitical issues like Nigeria’s large population and how it can be changed into opportunities, rather than curses, as well as climate change and it’s impact.

The Vice President further averred that, the University holds the keys to development not only in Sokoto State,but Nigeria, in general.

Osinbajo said:” The academic community has greater roles to play in finding plausible solutions to the various challenges facing Nigeria.

” Yet, the future is bright and everyone has a role to play in defining the future of Nigeria.”

He admonished the Graduands that, they were graduating at a difficult time when there are various challenges that are not peculiar to Nigeria, but urged them not to despair, as there were more opportunities in the outside world .

He specifically eulogized the former Governor of the state , Senator Aliyu Magatakarda Wamakko, for establishing the Institution and hailed Governor Aminu Waziri Tambuwal for sustaining the legacy .

The Visitor to the University, Governor Aminu Waziri Tambuwal, stated that, Osinbajo’s paper was apt and timely, as it had touched on very fundamental issues that were critical .

Tambuwal extolled the humility and uprightness of the Vice President,saying ,” these issues are with us and we must find solutions to them.

” We must not play politics with the issue of security , just as the issue of national unity is also very important.

” Universiies must align their fields of study to the challenges of today. I must also commend Senator Aliyu Magatakarda Wamakko for his vision of establishing the University.

” We must be committed to sustaining the legacies of our founding fathers and past leaders.”

The Sultan of Sokoto said at the event that, Osinbajo is a great orator, Professor and a Senior Advocate of Nigeria ( SAN), saying,” we will hear from one of the best and he is Internationally renowned.”

The Pro-Chancellor of the University, Engineer Bello Suleiman, said that, there wouldn’t have been any better person to deliver the lecture than the Vice President.

He commended Gov Tambuwal for his sustained support to the University,saying,” he has shown responsibility towards supporting us at all times.”

The Vice Chancellor of the University, Professor Muhammad Sani Dangoggo, also lauded Osinbajo for finding time to come to Sokoto, to personally deliver the Lecture , as well as commended the Sultan for his facilitation of the visit .

Dangoggo also thanked Gov. Tambuwal for providing all the logistics,including all the finances .