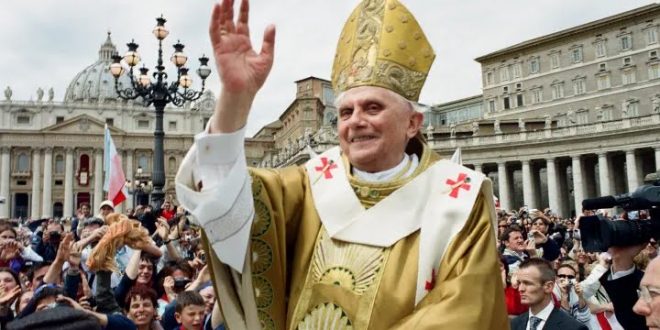 Following the announcement of the passing of Pope Emeritus Benedict XVI on Saturday at the age of 95,

A Team of Muslim scholars headed by mallam Gambo Abdullahi barnawa paid a new year visit to pastor yohanna buru’s house as they used the opportunity to extend their condolences greeting over the Death of Pope .

According to mallam gumbo, they visited pastor yohannas house to wishes him happy new year 2023 while also using the opportunity to immensely extend their condolence greetings to Christian all over the world over Death of the Pope Benedict XVI

While stressing that the Pope is a Noble,gentil, and Kind person.

He said (Pope was a man of peace .unity and harmony which makes him unique )

Adding that he spend his life praying and preaching peace all over the globe while promoting tolerance and forgiveness to all mankind irrespective of tribe, culture, religion race and ethnicity background .

(the world cannot forget the contributions of the Pope Benedict XVI preaching peace,love, tolerance and forgiveness among all mankind)

He further said that Benedict “was a spiritual guide to millions around the world and one of the leading academic theologians of all time that the world cannot forget ”.

” I saw him in many Arabs and Asian countries with top Islamic scholars ,Christians and world leaders preaching peace ,harmony and forgiveness ”

Gambo ended by saying “may his gentil soul rest in peace ”

Similarly, an interfaith specialist in Nigeria hajiya ramatu Tijjani who is equally the national president foundation for the protection of women and children in Nigeria has joined world leaders to pay tributes to the late Pope Benedict XVI, who passed away on Saturday, December 31, 2022,

Responding pastor yohanna, the general overseer of Christ evangelical and life intervention ministry sabon Tasha kaduna thanks the Muslims for coming to greet them at new year 2023.

“we have holy Books sent from one God :

“May he rest in Christ’s peace and rise in glory with all the Saints.”