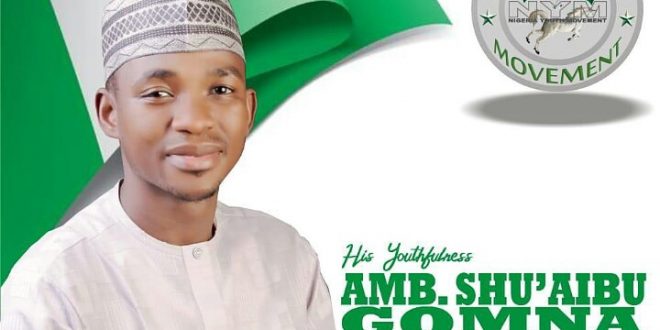 NYMIP Applaud Governor El-Rufa’i Recent Statement Over Youths Involvement Into Nigerian Politics
By Usman Nasidi Kaduna.
The Nigeria Youths Movement In Politics have applauded Governor Malam Nasiru El-Rufa’i over his recent encouragement statements towards motivating youths in the country for a greater involvement into the Nigerian politics system.
In a statement signed by the Kaduna State NYMIP chapter Chairman, Amb Shuaibu Gomna, explained that they need the assistance of people like Governor Malam Nasiru Ahmad El-Rufa’i and the political parties to kick-out gerontocracy in the country.
Amb Gomna added that the recent statements made by the Governor on his call to the youths, professionals, and religious leaders on shunning insults and critics by reminding them of the importance of being politically active in order to kick out the bad and old cargos from the corridors of power for the country to work again is a great strive towards actualizing a better future for the youths in the country.
He said, It’s undoubtedly notable that gerontocracy is what causes our today’s national public spheres to be  awash with visible and hidden intimations of generational leadership failings, incompetence and indolence in many parts of the nation’s leadership.
According to the statement, It’s of the belief that when a system is crippled, it’s the responsibility of the youths as a nation’s trustees of posterity to refix it. But unfortunately, the youths are suffering from the corrupt system caused by today’s cargos of incompetent and indolent governance pilots.
“It’s high time for the youths to start engaging in governance and participate in political and decision-making and quit being “Yes Men” to politicians. Although developmental efforts are being witnessed from regular social media updates of the youths’ efforts to participate in the Local Government Elections, most especially here in Kaduna state; an effort worthy of commendations and should be supported by the political parties of the aspiring youths.”
“It’s true that insults and critics have taken us nowhere and also unacceptable to believe the fact that protests and activism are taking us nowhere after a successful Not Too Young To Run movement campaign, the #Endsars, and many more fights that were won through protests. The utterances of HE Governor Nasir Elrufai sounded courageous and had proven his love for the youths and  should be emulated by all leaders and political parties. The youths should be embraced warmly and should be considered at the lowest level for grooming and startups.” it stated.
Amb Gomna, also commended the leadership of the APC for coming up with the renewal and new registration process of the party membership card, which allows many youths to participate in party politics.
Furthermore, also called on the other political parties to learn from the APC process, most especially the PDP to also come up with favorable validation of party membership cards for the youths participation in politics.
Meanwhile, it appealed to them to sets up ways of considering manifestos and debates for aspirants as they are of the belief that it will assist to kick out incompetent politicians that keep tormenting the state of there political system.
Finally, the leadership of NYMiP with the mandate of youth development, youths advocation in politics, and governance, while promised to keep striving to ensure youths participation in the political arena across the 36 states of the nation as part of the daily efforts of it state coordinators.
Share