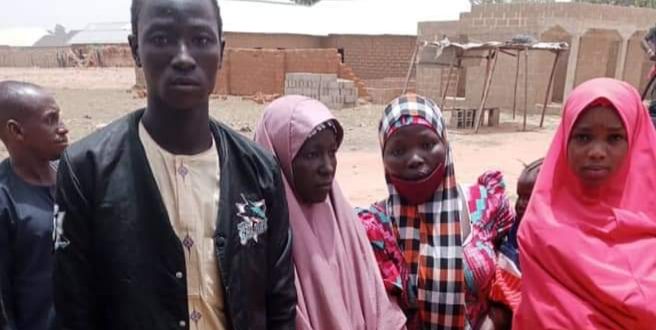 The Kaduna Police Command wishes to inform the general public of its relentless effort to curb the menace of armed banditry, kidnapping, rustling and armed robbery in the state and the successes recorded in the process.

2. On Friday 26th march, 2021 at about 1200hrs information has it that some armed bandits numbering ten (10) with sophisticated weapons blocked Kaduna to Birnin Gwari road in an attempt to kidnap five (5) occupants of a Volkswagen Golf vehicle with Reg.No DKA 539 TU heading towards Birnin Gwari from Kaduna.
3. On receiving the report, patrol team attached to Buruku Division immediately swung into action, engaged the bandits in fierce gun duel and successfully repelled the bandits who scampered into the forest with various degrees of bullet wounds and rescued all the occupants of the vehicle safely, namely,

(1) Nuhu Garba ‘M’
(2) Ismail Muhammed ‘M’
(3) Halima Suleiman ‘F’
(4) Karima Ayuba ‘M’, all of Birnin Gwari, and;
(5) Musba’u Usman ‘M’ of Funtuwa town in Katsina State. Effort is on high gear to ensure the fleeing bandits are apprehended. However, the victims have since been reunited with their families.

4. In another development, on the same date the command’s continued onslaught against criminals in the state yielded another remarkable result with a successful operation lunched by the combined team of FIB, STS, TIU FHQ Abuja and the Operation Yaki of Kaduna Command. While on the trail of suspected bandits the aforesaid Operatives intercepted a Toyota Highlander vehicle with Reg.No LGT 582 JL around saminaka forest of Lere LGA of Kaduna state. The occupants on sensing danger posed by the Officers immediately started shooting at the Operatives who equally countered the firing in which they succeeded in injuring the suspects namely

(1) James Dung ‘M’ 30yrs
(2) Joseph Oradboth of Jos town, Plateau state.
5. On the spot search of the vehicle was conducted and the following dangerous weapons were recovered;
(1) Eight (8) SMG Rifle
(2) One (1) Beretta Pistol
(3) Eleven (11) AK47 Magazines
(4) Fifty rounds of 7.62x39mm live ammunitions.
The suspects were rushed to Barau Dikko Teaching hospital where one of them was confirmed dead.

6. Meanwhile, investigation into the matter has been lunched and the remaining suspect confessed to be transporting the arms and ammunitions to Bandits In Niger, Kaduna, Zamfara and Katsina States.

ARREST OF TWO SUSPECTED RUSTLERS AND RECOVERY OF THIRTY TWO (32) RUSTLED COWS AND TEN (10) SHEEP
7. Similarly, on the same date the Command received information from Ladduga through DPO Kachia that some suspected rustled cows were seen in possession of one Ibrahim Musa ‘M’ 35yrs and Kabiru Musa ‘M’ 18yrs all of Ladduga Village of Kachia LGA Kaduna State.
8. On receipt of the said information, Operatives were swiftly mobilized to the area and succeeded in apprehending the suspects and recovered thirty two (32)cows and ten (10) sheep which were identified to have been rustled from Bauchi State. Investigation into the matter is ongoing with a view to prosecute the suspects and identify the rightful owners of the cattle.

8. It is however imperative to note that the above successes were not unconnected to the renewed collaboration between the Police and communities in the areas through prompt intelligence sharing. The Command appreciate the awesome gesture and call on all and sundry to support the Police in that direction as it assures them of absolute confidentiality while acting on shared intelligence.

9. In his effort to sustain the gains recorded so far in the fight against criminality in the state, the Commissioner of Police Kaduna Command, CP UM Muri has charged his officers and men to work very closely with the locals to improve on the current onslaught .