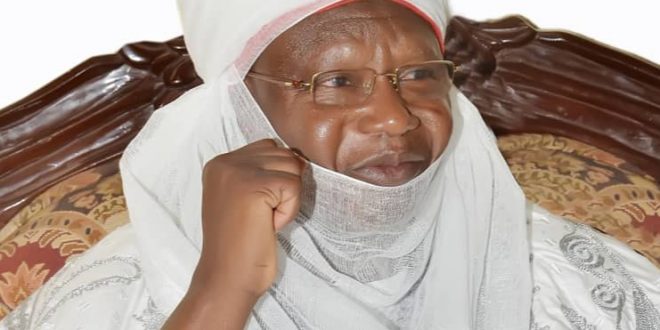 President Muhammad Buhari will confer national honour of Commander of the Order of the Niger, (CON) on the Emir of Nasarawa, Alhaji Ibrahim Usman Jibril at International Confrence Center, Abuja by 9am on 11th October, 2022.

History of the Emirate:

The founding of Nasarawa Emirate in 1835 AD was as a result of a little palace misunderstanding between Umaru Makama Dogo (then Madaki of Keffi and Jibrilu, son of Abdu Zanga, the first Emir of Keffi). This led him to move south of Keffi to establish the present Nasarawa Emirate.

Umaru Makama Dogo was born in Ruma (present day Katsina State). His father was Usman Rabawana and his mother was Amina. Having lost his parent at an early age, Umaru migrated to Zaria and stayed with Emir Musa who was accorded recognition by Mujaddadi Shehu Usman. He was with Emir Malam Musa (the flag bearer of Mujaddadi Shehu Usmanu ) during the early stage of the jihad in Zaria. Malam Musa later sent him south ward of Zaria to spread Islam. Umaru arrived at a place called Zanga (some six kilometers west of the present day Nasarawa town). He met Abdu Zanga a Fulani nomad like him from ‘Yan Tumaki and both of them became very close with the advice of Makama Dogo they presented themselves to the Emir of Zaria for recognition. This was done successfully which triggered the granting of a request of Abdu Zanga (by the Emir of Zazzau) to settle in the present day Keffi. Along with Gunki and Makama Dogo they consolidated their position.

After the death of Abdu Zanga, a leadership tussle necessitated the move of Makama Dogo (then Madakin Keffi) westward to Yankardi, where he camped about ten kilometers South of Keffi.

He later moved to were was known then as Kasar Kwato or Igbiraland to establish his own kingdom. He arrived Tammah and met Bagobiri Kasimu, who assisted him in the establishment of a kingdom called Nasarawa (meaning: The victorious). Makama Dogo fought several wars in the conquest for Islamization. He established his kingdom up to the bank of the Benue River spreading Islam among the various tribes that constitutes the present day Nasarawa and Toto Local Government areas as well as part of Kogi and the Federal Capital Territory. At his death in 1858, Makama was succeeded by his eldest son Ahmadu.

Nasarawa state was created in 1996 out of neighboring Plateau state. Located in the north-central region of Nigeria, it is bordered on the West by Federal Capital Territory, the North by Kaduna, and the South by Benue and Kogi, and on the East by Plateau and Taraba states respectively.

Nasarawa has a diverse range of ethnic groups indigenous to the state. There are 29 languages spoken in Nasarawa State. According to the 2006 census, about 2 million people reside in the state and it has 13 local government areas and the capital is located in Lafia town.

Brief History of Emir of Nasarawa:

The Emir was brought up by his parent and as customary in Muslim-Fulani communities, he began his educational pursuit at the palace’s Koranic school under Mallam Babba and later under Mallam Jibril Jatau of Bakin Kogi quarters.

He was enrolled into Nasarawa Central Primary School during the time of the famous teachers: Malam Hussaini Katukan Nasarawa and Mallam Dallah, all of blessed memory. After he completed and obtained a class seven primary school certificate, he proceeded to Community Secondary School Nasarawa now Government Science School. He worked briefly as a Teacher after his secondary school education and then gained admission into the Gongola State College of Preliminary Studies, Yola from 1976 to 1978.

He returned to Nasarawa to teach in the present day Science Secondary School before proceeding to Bayero University in 1980.

He graduated in 1983 with B.A. Education/Geography. He served his one year mandatory National Youth Service Corps (NYSC) at the Nigerian Army School of Artillery in Kachia, Kaduna State as an instructor in Map Reading.

He briefly served as a lecturer in the Federal Polytechnic, Nasarawa before taking up appointment with the Plateau State Ministry of Education where he was posted to New Karshi as a teacher.

He moved to the Federal Capital Territory, (FCT) Abuja in 1985 where he continued his teaching career at GSS Kuje and taught for two years before proceeding to BUK for his Masters Degree in Land Resource, specializing in Land Administration in 1990.

He moved to the department of Land Administration in 1990 where he distinguished himself and was assigned numerous crucial assignments which includes been the Secretary to the Task Team for Computerization of the Cadastral and Land Registry of the FCT. The task led to the establishment of Abuja Geographic Information Systems, ( AGIS ) in 2003. He spent over 40 years in service, 30 of which were spent in the FCTA.

In 2012 he was seconded to Nasarawa State where he helped set up the Nasarawa State Geographic Information Services, (NAGIS) as Project Manager. Worthy of note was that in NAGIS he managed a project worth $16.876 ( sixteen millon, eight hundred and sevebty six Dollars) using modern geospatial technologies to develop a modern geospatial data infrastructure for the state. The project has three components: Orthophoto mapping, Geographic Information Services and Urban Planning and Urban Renewal.

He served as Minister of State for Environment from 2015 to 2018. He voluntarily resigned his Ministerial position and Member of the Federal Executive Council in December 2018 to become the 12th Emir of Nasarawa.

The Emir Jibril is married to two wives and blessed with seven children ( a girl and six boys).

He loves travelling, Horse riding and giving medical assistance to the needy.