The Chairman of the Senate Committee on Defence and Deputy Chairman, Senate Committee on Anti Corruption, Senator Aliyu Magatakarda Wamakko, has urged Nigerians to have renewed faith in Nigeria’s democracy.
Senator Wamakko,  who is also the Chairman of the Northern Senators Forum, has called on the citizens of the world’s most populous black nation to pray fervently for the country , its leaders and citizens .
In a statement signed by Bashir Rabe Mani, Dan masanin Mani special assistant, media and Publicity to senator Aliyu Magatakarda Wamakko revealed that.
Senator Wamakko,  who represents Sokoto North Senatorial District, was commenting when he feliciated with Nigerians on the 21st Anniversary of the nation’s return to democracy in 1999.
According to him: ” All of us as citizens and residents, must continue to be patriotic and religiously committed to the Nigerian project .
” We are in it collectively as the country belongs to all of us and the task of ensuring its even socioeconomic and political growth, as well as development solely rests on us.
“” Nigeria is the only country we can boast of and nobody can take it to greater heights, but only us.”
Senator Wamakko, who also noted that Nigeria’s budding democracy has so far fared fairly, however opined that , there was still room for an improvement.
Wamakko added that, democracy in Nigeria has come thus far, as well as noted that, Nigeria’s democracy has ceaselessly trudged on for over two decades.
His words, ” Democracy in the country is becoming formidably entrenched in Nigeria. Democracy is still the best form of government, in spite of the few odds.”
Senator Wamakko, a former Governor of Sokoto State,  vowed that, the National Assembly will continue to partner the Executive , Judiciary and other stakeholders, to make Nigeria better .
Senator Wamakko further fervently  prayed to the Almighty Allah that, the security challenges being faced by the country will soon be overcome by the grace of God.
Share 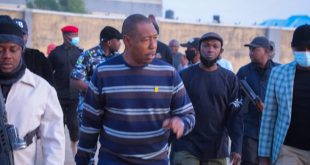