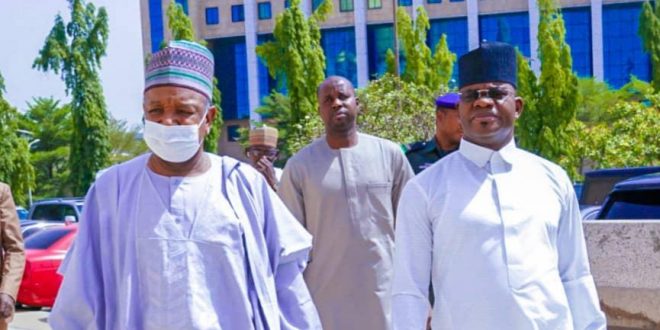 Kogi State Governor, Yahaya Bello has commiserated with the Governor of Kebbi State, Atiku Bagudu, and the people of Kebbi State over the demise of Shehu Bagudu the immediate younger brother of Governor Bagudu of kebbi state.

In a Statement Signed by Onogu Muhammed
Chief press Secretary to the Kogi State Governor, made available to newsmen stated that

The Governor who attended the Janazah prayed Allah for the peaceful repose of the deceased, described him as a pious man who embraced peace by all standard.

He asserted that death would come for all man kind at different times as it was a debt humanity must pay but it was important that such occurrence meets good deeds and good will in us.

The Governor who attested that the late Shehu Bagudu was a Man with good antecedents and good will noting that such testimonies should be a comfort to the deceased’ family.

Governor Bello however prayed for God to comfort those heavily grieved by his demise particularly his immediate family and give them the fortitude to bear the irreplaceable loss.