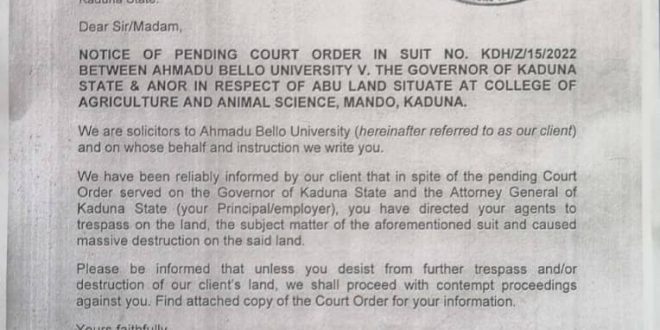 Ahmadu Bello University’s College of Agriculture and Animal Science (CAAS), Mando, Kaduna has raised alarm over alleged encroachment and forceful take over of its land by Kaduna State Government and its agencies, despite a court order stopping them.

Provost of the College, Dr. Hassan Adamu Hamidu, raised the alarm while addressing a press conference on behalf of the University on Tuesday, saying the action has exposed the school to security threats, despite the issue of kidnapping and other security challenges. 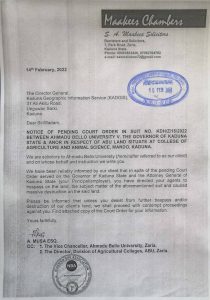 According to him, despite a court order dated 18th January, 2022 restraining the government and its agencies from encroaching the College land, the agencies have moved in to demolish the school fence and started clearing its land.

The court order he made available to Journalists stated categorically that Kaduna State government and its agencies should restrain, from trespassing, entering and or carrying out any action on the said land. 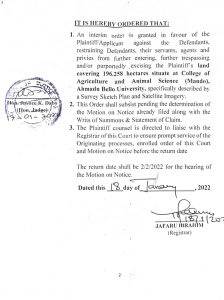 According to the Order signed by the Registrar of the Kaduna State High Court, Zaria Division, Jafaru Ibrahim, the order shall subsist pending the determination of the Motion on Notice already filed along with the Writs of Summons and Statement of Claim.

The Order read that, “An interim order is granted in favour of the Plaintiff/ Applicant against the Defendants, restraining Defendants, their servants, agents and privies from further entering, further trespassing and/or purportedly excising the Plaintif’s land covering 196.258 hectares situate at College of Agriculture and Animal Science (Mando), Ahmadu Bello University, specifically described by a Survey Sketch Plan and Satellite Imagery.”

He explained that the demolition of the fence by the Kaduna State Government agencies has exposed the College, Staff and Students to security threat considering the ravaging kidnapping and Banditary in the axis.

He described the action of Kaduna state government as a desperate act to take over the College’s land.

He said that, “in 2012, a committee headed by the then Comptroller Works and Housing, was set up to demarcate the land between the College of Agriculture and Federal Ministry of Agriculture, while submitting its reports in 2014, the committee advised the Mando College to fence its own entire boundary to prevent further encroachment, which was duly carried out and has been serving as a grazing area for the college’s livestock.”

The Provost however said, despite the fencing, attempt were made to take the land from the college.

However, when Journalists were taken on tour of the land, Bulldozers were seen pulling down the fence were clearing the Land. 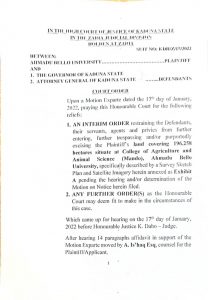 When contacted, Director General of KADGIS, Mrs. Altine Jibrin declined comments on the matter saying it is still in court.

She also declined further comment on the bulldozers sighted by journalists at the site, but she simply stated that, the agency does not operate with bulldozers.