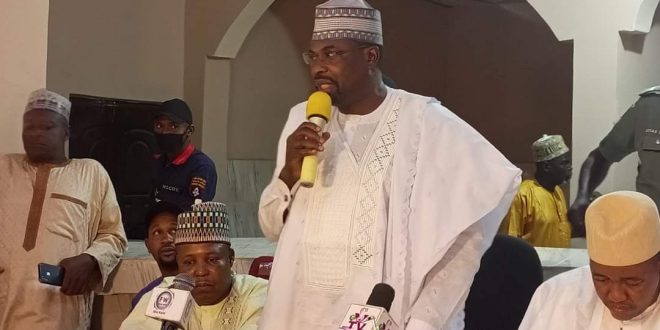 The APC aspirant for Zamfara Central Senatorial Zone upcoming by-election and immediate past Speaker of the State House of Assembly, Rt Hon Sanusi Garba Rikiji today handed over to the state APC leadership 2803 assorted bags of Rice and millet as Ramadhan package for onward delivery to his constituents.

While presenting the items at the APC State Secretariat, Rikiji who also announced a cash donation of N1 million from his friend, Musa Mallaha for the purchase of sugar to the beneficiaries cutting across the four local government areas of Gusau, Tsafe, Bungudu and Maru said the aim is to support the less privileged in the constituency especially during the Ramadhan fast.

He assured that both his foundation which has now attracted national outlook and his personal goodwill will continue to reach all the constituents in order to reduce the current global hardship facing them.

The two term state assembly speaker also urged the people to continue to pray for an end to security challenges bedeviling the state in particular and the nation in general.

He commended the APC leadership in the state under the leadership of Governor Bello Mohammed Matawalle MON and the Chairmanship of Hon. Tukur Umar Danfulani for bringing unity and serenity in the party and assured to always be part of the progressives in the state.

Receiving the items, the APC state Chairman, Hon. Tukur Umar Danfulani thanked the donor for the gesture noting that if the well to do groups and individuals in the state would emulate him, the masses will have less problems and the government will have more opportunities to meet the yearnings of the electorates.

The chairman expressed confidence in Rikiji’s prowess as a law maker and political leader.

He revealed that so far, Rikiji is the only person from the APC who has formally indicated interest in the Zamfara Central Senatorial Zone by-election which vacuum was created with the recent appointment of Senator Hassan Muhammad Nasiha as the state Deputy Governor.