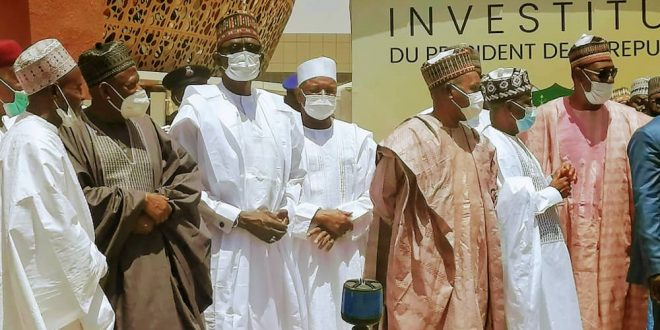 This was contained in a statement signed by the Special Adviser on Media and Publicity to the Kebbi State Governor, Yahaya Sarki and issued to Newsmen on Saturday.

The epoch-making handing over ceremony from the outgoing President , Mahamadou Issoufou, who served for two year terms, of five years, to Bazoum, was attended by the leaders of many African countries and foreign envoys, from different parts of the world, including its closiest neighbor, Nigeria.

Before the swearing in and inauguration of the new Government, Issoufou handed over the Sword Of Office and decorated his successor, Bazoum with the highest Honor of Niger Republic, amidst loud ovation from the tumultuous crowd.

The attendees came from within and outside the country to witness the first successful civilian to civilian transition /handing over of power.

The swearing ceremony was performed by seven Justices of Niger Republic’s Constitutional Court, after which Bazoum held the Quran and swore by the Holy Book.

In his post inauguration speech, Bazoum narrated how his predecessor, Issoufou, spearheaded the formation of their party.

He also extolled the good leadership qualities of Issoufou, which according to him, recorded myriad of tangible, invaluable developments in Niger Republic.

Mohamed Bazoum also promised to fight corruption head-on, without fear or favor and collaborate with the Nigerian authorities to deal with insecurity, especially the menace of Boko Haram.

It will be recalled that, President Bazoum had defeated Mahamane Ousmane , a former President, at the Presidential runoff election, in February,2021.

The elated people of the eight Northern Frontline States Niamey have long lasting close cultural and economic ties with Niger.

Apart from the common border that separates them, trade, commerce and inter-marriages thrive between the Nigerien and Nigerian border communities.

The members of the Nigerian entourage on Thursday night treated to a befitting dinner by the Nigerien Government, to further show unwaivering appreciation and cement the age-long existing cordial relationship between Niger Republic and the neighboring Northern Frontline States.