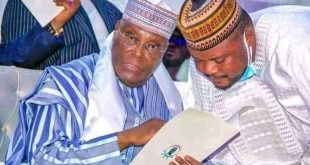 Governor Bala Mohammed of Bauchi state has commiserated with the people of Warji local government area of the state over a recent flooding that resulted to the dead of five persons and properties worth millions of naira lost.

The governor while speaking on Thursday when he led other government officials on a sympathy visit at one of the flood scenes in Dagu village of Warji Local government, said his government has provided emergency relief materials to the victims.

He assured that another relief materials would be provided as soon as inventory of the incident is completed to cushion the effect of the lost of lives and properties suffered by the affected persons.

“We are here to commiserate with the people and families of those who lost their lives over what happened following the massive flooding that affected Dagu village”, he said.

According to him, “we understand about five to six people have lost their lives and properties worth millions of Naira were also lost. On behalf of myself and my family and the government of Bauchi we commiserate with the district head of Warji and all the families that were affected by the unfortunate flooding”.

The governor while calling on law abiding citizens to always listen to authorities on how to build their settlements, noted that government will send engineers to proffer solution to the causes of flood in the area.

“We understand that this town has been populated and that is why people have built houses on the water ways and of course we have to provide engineering solution, but certainly we have to listen to the authorities so that at the end of the day we are not going to have this happened again” the governor assured.

Bala said his government will work with federal government and spirited public individuals, organized public sector and international community to take inventory environmental problems and challenges not only in warji but other LGAs with a view to finding amicable solutions.

The governor urged traditional rulers particularly district heads to ensure that justice and equity is done in the distribution of relief materials to victims of flood disaster.

In his speech, the Director General of Bauchi state Environmental Protection Agency (BASEPA), Dr Rilwanu Kabir said governor Bala Mohammed has directed the State Emergency Management (SEMA) to tour 20 LGAs in the state to assess any possible threat to the environment with a view to taking proactive measures.

Dr Kabir who spoke on behalf of SEMA said apart from lost of lives and property worth millions of naira, many people have been rendered homeless in the area.
He assured the people of Bauchi state that a lot of measures are been put in place by the government to contain threats of flooding in the state.