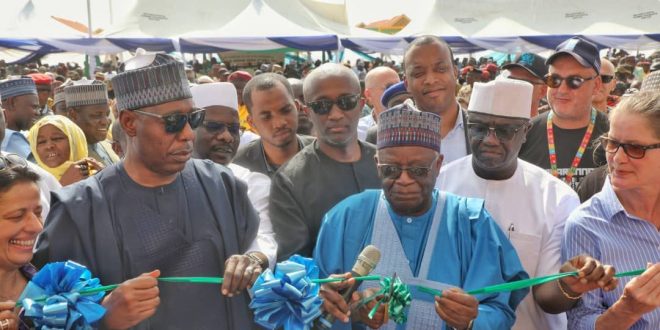 President Muhammadu Buhari’s Chief of Staff, Professor Ibrahim Gambari, on Saturday in Mafa town of Borno State, commissioned a combined number of 804 houses for the resettlement of displaced members of the Ngarannam community and neighboring villages.

Although the project is for 804 houses, a total of 564 were completed. 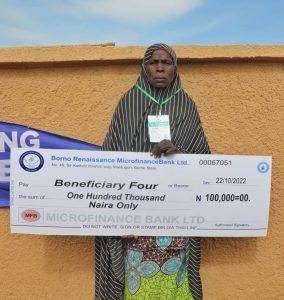 The 804 houses were houses by the United Nations Development Programme (UNDP) and the Borno State Government.

Borno State Government is building 304 houses from which 204 were completed with 100 ongoing, while the UNDP has 500 units of houses funded through a Regional Stabilization Facility (RSF) from which 360 were completed while 140 were ongoing.

The UNDP’s housing estate, designed with a health centre, police post, school and market, was for the resettlement of Ngarannam community, while Borno’s houses are for resettlement of a number of villages neighboring Ngarannam.

From both projects, a total of 564 houses were completed out of the combined 804 targeted by Borno Government and the UNDP.

The UNDP had, in July 2019, developed a Regional Stabilization Facility (RSF) with support from Germany, Sweden, the United Kingdom (UK), the Netherlands and the European Union (EU).

Ngarannam community in Mafa was attacked and destroyed by Boko Haram some years back, forcing community members to become displaced.

With the reconstruction of the community, a ceremony was hosted by Governor Zulum at the site of the UNDP’s houses in Mafa, for the commissioning.

Gambari was the special guest of honour while Nigeria’s Minister of State for Budget and National Development, Prince Clem Agba, was the guest of honour. Agba co-chairs Nigeria’s window of the Regional Stabilization Facility (RSF).

The ceremony, held amidst indigenous cultural performances and celebrations, was attended by the Deputy Governor of neighboring Yobe State, Idi Barde Gubana, Executive Secretary of the Lake Chad Basin Commission (LCBC), Amb. Mamman Nuhu, UNDP’s resident representative in Nigeria, Mohamed Yahya, and representatives of ECOWAS, the European Union, and embassies of Germany, Sweden and the Netherlands, among other development partners.

National and State Assembly members and candidates from Borno State, the Shehu of Dikwa, party leaders and chieftains, commissioners, advisers and assistants, heads of government establishments and other senior government officials from Borno were in attendance.

Guest of honour, Prince Clem Agba, later in his remarks, praised all stakeholders who contributed towards the reconstruction of the Ngarannam community.

He highlighted Governor Zulum’s extreme commitment and reaffirmed the FG’s commitment to stabilizing the northeast through multiple opportunities.

Chief Host, Governor Zulum said Borno was highly indebted to the UN and other humanitarian and development partners for their enormous support.

The governor praised UN Secretary-General, Antonio Guterres, who had visited Borno in May, 2022, as part of his relentless support for Borno’s stabilization.

He said Buhari’s administration would continue to provide the needed support to the government of Borno, rest of the northeast to fully stabilize the northeast.

Gambari, accompanied by Zulum, Agba and foreign development partners, commissioned all the houses at both the UNDP’s site and Borno Government’s.

Keys to the houses were symbolically given to some families amongst the beneficiaries.

Meanwhile, Governor Zulum announced the distribution of food stuff and 2,674 cattle made up of 873 cows and 1,801 goats as livelihood support for families that were being resettled in both estates.

Additionally, 503 housewives were each to get a pair of she-goats and one he-goat. 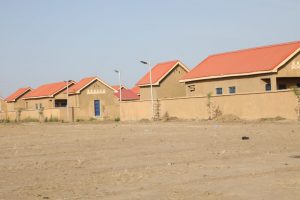 Zulum also said each of all the resettled households were to get two 50 kg bags of rice and maize, a gallon of vegetable oil, a mattress, plastic mat, blanket and clothing materials.

The governor also announced each of the resettling families, including the female heads of households, to get N100,000 cash through a micro-finance bank for economic activities.