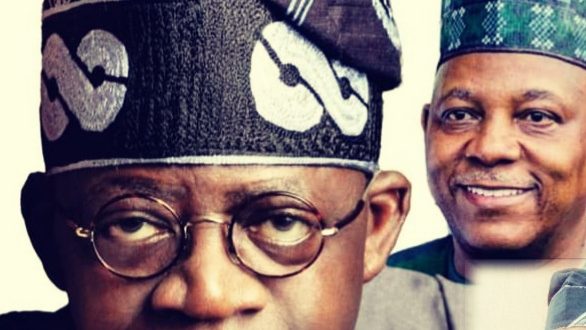 For those who are familiar with Nigeria’s political arithematics,  Kano remains a major decider of who gets a smooth ride to Aso Rock.  Little wonder (that)  over the years,  major contenders to the presidency always spend time and resources jostling for support from Kano,  known as not only the most populous state in the North,  coming second in the country (after Lagos),  but confirmed as the most political conscious state across Nigeria.

When other presidential candidates  sneak into Kano and go unnoticed,  the case of the presidential candidate of the All Progressive Congress (APC),  Asiwaju Bola Ahmed Tinubu, is always different.  Whenever he flies into Kano,  he moves around with fanfare and on a long convoy of unprecedented,  but spontaneous crowd of supporters and well-wishers, coming from different classes of people—the Talakawa,  middle class,  the high and the mighty.

On  Saturday,  October 22, the Jagaban Borgu came  home to interact with his people in Kano.  Those who know the National Leader of the biggest political party in Africa (APC),  will attest to the fact that he has never minced words,  describing Kano as a home,  away from home. And whenever he is in the ancient commercial city,  the reception he receives is not only always resounding, but fantastically marvelous.

As his flight touched down at Malam Aminu Kano International Airport (MAKIA),  Tinubu was received by thousands of party supporters who were at the airport for several hours waiting for him and his entourage.  Governor Abdullahi Umar Ganduje and his cabinet,  members of state and National Assembly and leaders of APC in Kano were among those who welcomed Asiwaju at the airport from where he moved to Government House on a very long convoy that was slowed down by mammoth crowd of supporters who thronged the streets of Kano,  chanting and hailing the incoming president.

Already, members of all political groups under the APC,  members of all the Tinubu presidential support groups,  members of state and National Assembly,  members of Governor Abdullahi Umar Ganduje’s cabinet,  market women,  youth groups,  clerics,  traditional rulers,  opinion leaders,  Talakawas,  leaders of ethnic communities, the business community,  artisans, the physically challenged associations, even those from other political parties,  among many other classes of people  in the society, are all well prepared and ready to have meetings with   our incoming president (Insha Allah) come 2023.

Asiwaju Bola Ahmed Tinubu did not come to Kano for campaigns.  He is coming for interactive session with party stakeholders,  the business community and other interest groups.  Already, individuals and organizations have sponsored fliers,  posters and even jingles in radio stations welcoming the APC presidential candidate and his entourage.

This goes a long way to show that Kano is with Asiwaju Bola Ahmed Tinubu. And when Kano shows full support to any presidential candidate,  it is a done deal to Aso Rock.  Tinubu himself,  has not hidden his love and affection for Kano people.  He has always identified with the Kanawas, and their support for him remains unshakable.

Previous Borno: Buhari’s CoS Gambari opens 804 houses built by UNDP, Zulum’s Govt
Next 2023: HOW MATAWALLE IS RALLYING ROUND THE NORTH WEST FOR TINUBU