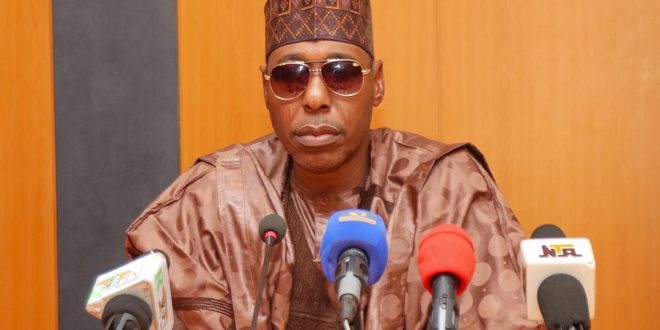 The two envoys were in Maiduguri to particularly, reaffirm the support of the United Nations and the EU, to the Lake Chad Basin States in their fight against terrorism, enhance joint high-level advocacy between UN-EU and LCBC in-order to accelerate the implementation of the Regional Stabilization Strategy of the Lake Chad Basin and engage with affected communities to get first hand appraisal of the situation on ground.

Governor Zulum in his remarks, urged the United Nations and the International community to support the states in the Lake Chad Basin to address the root causes of the insurgency within the region.

Zulum made reference to resolution 2349 (2017) adopted by the United Nations Security Council at its 7911th meeting, on 31st March 2017, which called upon the Governments in the region to take further measures to address social, political, economic, gender inequalities among several other problems.

The Governor also called for the international support to recharge the Lake Chad through some identified water sources, which he said, when completed will provide employment opportunities to millions of people across the borders of Nigeria, Niger, Chad and Cameroon.

“ I would like to urge your two distinguished offices to join us in championing the recharging of the Lake Chad through already identified water sources from within Nigerian territory which will not only help rebuilding livelihood in the Lake Chad region, but also reduce flooding in parts of Nigeria and encourage irrigation along the rivers. This reduces other humanitarian crises and increase food security. This is central to attainment of peace and stability in the region.” Zulum said.

“I would like to commend the leadership of Prof. Babagana Umara Zulum as Governor, I know the positive role he has played to put in place the forum of Lake Chad Governors and recently also, he demonstrated during the third meeting of the Governors in Younde that we have to sustain this forum. The proposal he made at the forum meeting was very relevant. Mr. Lounceny said.