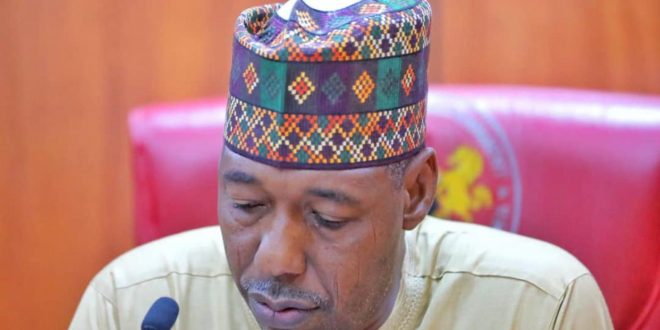 … Asks govt to speed up promotions

The organized labour, made up of the Nigerian Labour Congress (NLC) and the Trade Union Congress of Nigeria (TUC) in Borno State, on Tuesday in Maiduguri, commended Governor Babagana Umara Zulum for last week’s release of N705 million to clear outstanding leave grant owed workers.

The statement was issued after a Joint State Administrative Council meeting of the Organized
Labour, which was held in Maiduguri.

Governor Zulum had on Tuesday, 2nd August, 2022 approved the release of N705, 621, 166 to nine thousand and fifty-eight (9, 058) eligible civil servants across Borno State to clear outstanding leave grants for 2020 which was delayed due to some issues that needed to be sorted out.

While 2020 leave grant was delayed, Zulum had since approved the payment of the 2021 leave grant to the same workers.

With last week’s approval, the Governor cleared both 2021 and 2020 leave grants for Borno Workers, leaving only 2022 that will be paid at due time.

The organized labour appealed to “all workers in the state to be responsive in the discharge of their given responsibility as the leadership will not relent in its effort to make sure that their welfare is at the top most priority….”.

The labour unions also commended the state government for introducing a payment system that has proved “better service delivery”.

Meanwhile, the organized labour also in their joint statement, on Tuesday, called on the state government to “hasten the implementation of outstanding promotions, so that workers will have a sense of belonging”.

The call was part of the joint statement signed by chairman of the NLC, Comrade Yusuf Inuwa and TUC chairman, Comrade Babayo M. Hamma.

It would be recalled that on June 26, 2022, at the swearing-in of newly appointed commissioners and a permanent secretary, Governor Zulum had publicly directed the state’s Head of Service to identify promotional vacancies and organize promotional examinations for eligible workers to get promotions with benefits paid to them.