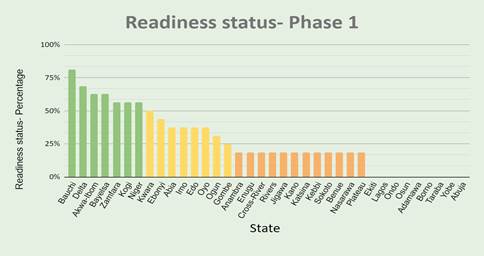 In a statement Signed by YUSUF IDRIS GUSAU
Director General, Media Public Enlightenment and Communications to the Governor made available to journalist revealed that

This was disclosed by the Permanent Secretary Ministry of Budget and Economic Planning, Alhaji Garba Altine Dauran while making a brief presentation during a meeting with officials of the British High Commission at the Government House, Gusau today.

The permanent secretary told the meeting that Bank of Industries BOI and Government Enterprises Empowerment Programme GEEP have unanimously rated Zamfara State fifth position in the first phase implementation of CARES Programme among all the 36 states of the country.

He explained that the ranking was communicated to the state Coordinating office of NGCARES Zamfara Coordinating Unit of the state Ministry of Budget and Economic Planning by the BOI and GEEP evaluators.

He added that as a result, Zamfara has been positioned 5th in implementation readiness which by extension means that the state, under governor Matawalle is determined to bring a lot of development according to the indicators.

He further said, CARES is aimed at total economic recovery stimulus for which the government earmarked funds to carryout a lot of Humanitarian activities in the state.

The UK high Commission team was led to the state for the meeting by the Head of Governance, Conflict and Social Development of the Abuja Mission office, Mr. Sam Weldock

The meeting was attended by the Head of Service Alhaji Kabiru Balarabe who doubles as Acting Secretary to the State Government, Special Adviser on Security matters, DIG Ibrahim Mamman Tsafe, Permanent Secretaries of Finance, Alhaji Kabiru Mohammed Gayari and that of the Office of the Executive Governor, Abubakar Barmo.