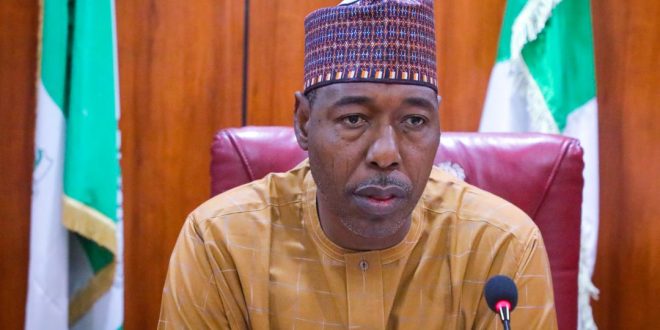 Easter: Zulum greets Christians; proud of Borno’s Christians, Muslims for peace despite Boko Haram
Borno Governor, Professor Babagana Umara Zulum has felicitated with all Christians in the State at the Easter season.
Zulum, in a statement by his spokesman, Malam Isa Gusau, also said he was very proud of Christians and Muslims in Borno State for maintaining peaceful coexistence in all the 27 Local Government Areas of the State, despite facing tough situations from Boko Haram since 2009, whose fighters have undertook numerous attacks on places of worship.
Find below, Zulum’s remarks quoted from the statement:
“As Christians all over the world mark this year’s Easter celebration, which began Friday, I felicitate with my Christian brothers and sisters in Borno State.
A season like this which calls for deep and shared reflection on our lives in general, should remind us of not just the challenges we continually face, but also, to be grateful for some accomplishments we have made together as citizens with equal stakes in the Borno project.
For me, one great accomplishment recorded in Borno State is the peaceful co-existence between Muslims and Christians across the 27 Local Government Areas despite being faced with all manner of inciting tactics deployed by those who wish to knock our heads.
I am immensely proud of the people of Borno for the religious harmony between Christians and Muslims in families, communities, schools, all our social and political gatherings, at Government institutions, private work places, markets and other business places, in our sporting activities and other aspects of our shared existence.
I thank and commend our traditional rulers, elders and religious leaders in both faith, for being role models for younger ones and for our children. Indeed, I am proud of the religious peace we have, and I urge us all to continue to do whatever we can to nurture and preserve that precious harmony between us.
Government is continually committed to sustaining that bond of peace, and critically, we are determined, more than ever, working behind the scene to find lasting end to the Boko Haram insurgency.
I salute all our armed forces, the multinational joint task force, and our volunteers in the civilian JTF, hunters and vigilantes, for all the sacrifices towards finding peace in Borno.
I urge all of us never to relent, and to always take steps ahead of the insurgents in both our preventive and responsive approaches.
May God grant us enduring peace in Borno, other parts of the northeast and rest of Nigeria”
Share