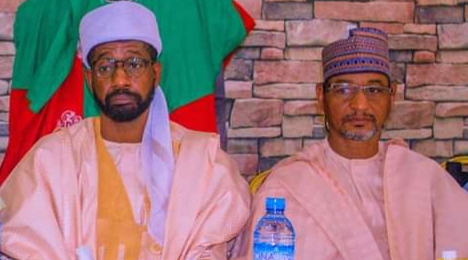 The All Progressive Congress ( APC) National Legal adviser Ahmad Usman El- Marzuq has called on the Good people of Katsina state and Daura emirate to come out in their large number to make sure they get their voters card for the benefit of all.

The legal adviser made the call during a town hall meeting with the APC stake holders, Imams and traditional leaders from the state that holds in Daura.

According to the legal adviser the reason behind the meeting is to have a good working relationship among all Daura emirate  people so that to have a head way with an intention of moving the emirate forward.

“We need a good working relationship from all quarters especially APC members that contested during the concluded  primary elections that took place in Daura, we are saying sorry to those feel offended as a result of the primary election, please let us unite together for the benefit if the state and Daura emirate in general”.

Then the national legal adviser announced the donation of 2 million naira to the committee, that is going to work for mobilising locals to come out and register their voters card with an intention of having the highest  number during 2023 general election”.

“Actually, we have a serious challenge on us for a single reason that president Buhari is not contesting , now we all have to come together and work for us to succeed”, he added.

El – Marzuq also lamented that APC is an attractive party that they all benefit from it, so people need to always be thankful to almighty God for the opportunity.

He thank the Katsina state Governor Alhaji Aminu Bello Masari for executing a number of projects within the Daura emarate that comprised five local Government, we are always saying thank you for that for making our citizenry happy.

“My dear people I also called on you to give your support to the national population commission, because they are going to do a trial census in Daura Local Government, as Daura is among the few Local Government that was selected for the trial programme”.

“We are also grateful to the leaders for all the projects conducted to the our area”.

I also called on all the stake holders and leaders to please take the issue of voters registration very serious, for this reason I contributed the sum of 2 million naira to mobilize people from all the five Local Government and I call on all to donate for the programme to be a success.

“I also promise that this kind of gathering is going to be more than one time in a year”, the legal adviser promised