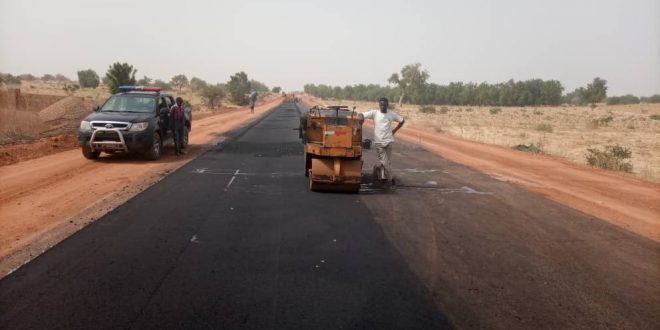 The Federal Government is currently executing a 45kms Nigeria – Niger border road project at the cost of over N 9 billion.

The all-important road project which links Nigeria and her neighbour, Niger Republic, was progressing at Balle, headquarters of Gudu Local Government in Sokoto to the Niger border.

This was contained in a statement signed by Bashir Rabe Mani, Senior Special Assistant, Media and Publicity, Senator Aliyu Magatakarda Wamakko, issued to Newsmen on Wednesday.

The work was being sucessfully conducted by the APC-led Federal Government, under President Muhammadu Buhari.

The invaluable gesture of Wamakko was aimed at further providing more roads linking Nigeria and her neighbours, as well as bolstering the socioeconomic development of the countries .

Reports revealed that, the work was going on steadily and according to spefications .

It was also observed that, adequate drainages and culiverts were also being constructed along the road, to prevent it from being flooded during the raining season.

Similarly, the road was being asphalted, so as to guarnatee the safety of vehicles, as well as other motoring publics plying the road .

It could be recalled that, a leading politician from the Peoples Democratic Party ( PDP), in the state, had challenged the ruling APC to showcase any work, worth N 500 million in the State .

This road under focus is one of the myriad of developmental projects that were either successfully completed by the Federal Government or were ongoing across the State .

In a related development, another road project facilitated by Wamakko is the ongoing N 4 billion Sabon Birni to Tsululu to Maradi border, in Niger Republic.

The road project was also progressing steadily , while it was being conducted according to the specifications.

Meanwhile , the Federal Government had also successfully executed scores of projects in the State , under the Tertirary Education Trust Fund (TETFUND).

They were executed at the Usmanu Danfodiyo and Sokoto State Universities , Shehu Shagari College of Education and the Umaru Ali Polytechnic, all in Sokoto.

These projects and many others in the pipeline showed that , the Federal Government has made Sokoto as one of its priority states , contrary to the apprehension of some of its residents.