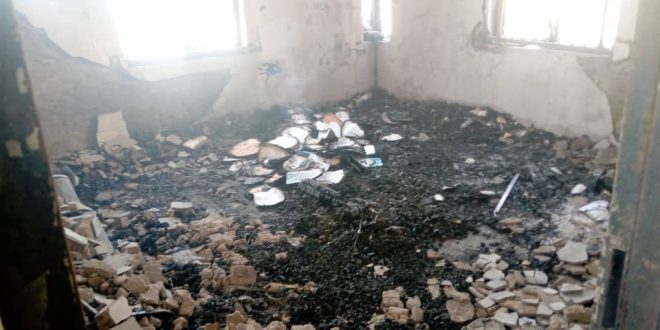 A visit to the scene of the incident revealed that, the Chambers had been completely razed to ashes, with nothing salvaged.

Some of the items lost in the inferno were assorted law books, Journals, documents, furniture and electrical / electronics equipment, among others .

No life was however lost as a result of the fire incident, while no injury was recorded.

The Principal Partner of the Firm, Barrister Nuhu Muhammad, said that, the fire started at around 8:00pm on Wednesday night, when power supply was saying to have been restored by the Kaduna Electricity Distribution Company ( KAEDCO).

He said:” I was called by a neighbor at around 8:00 pm that our Office was up in flames .

” When we closed at around 6:00pm, there was no electricity supply.”

Muhammad expressed delight that,no life was lost as a result of the inferno ,while nobody was injured .

He lauded Personnel of the State Fire Service for their timely intervention that curtailed the extension of the fire to their neighbors.