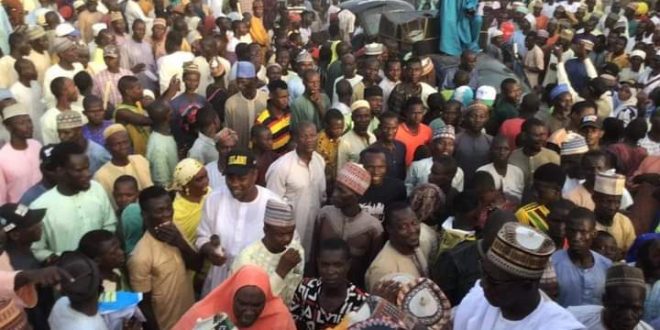 GALE OF DEFECTIONS IN SOKOTO PDP AS OVER 15,000 MEMBERS REJECT PARTY FOR APC

….REAFFIRM SUPPORT TO ALL APC CANDIDATES

As political parties in Nigeria are warming up for the 2023 General Elections, PDP in Sokoto state, is again faced with another setback as over 15,000 members dumped the party for APC in Sabon Birni Local Government Area of the state, attributing their exit to the party’s lack of transparency, accountability and trust.

Those who defected are some PDP wards executives in the area such as Alhaji Shago Sarkin Fawa from Gatawa ward, Alhaji Rabi’u Kalage, Alhaji Lawali Akimba Tara, Faruku Zalla Bango, Alhaji Sa’idu Bawa and a Zonal Secretary of the party Alhaji Musa Zonal who was a loyal member to Hon. Abdullahi Salame’s defunct faction.

Receiving the decampees at Sabon Birni town on behalf of party leaders in the state, APC Deputy gubernatorial candidate, Hon. Idris Muhammad Gobir, explained that PDP in Sabon Birni Local Government has become history looking at the multitude of its members that rejected it for APC.

Hon.Gobir further said that the state government under the watch of Governor Aminu Waziri Tambuwal, has failed to put in place any infrastructural development in the area for the past seven and half years.

He assured the new entrants that, APC will ensure the provision of social amenities in the area and in the state, if elected into power come 2023 elections.

Other speakers during the occasion included APC Chairman in the area, Alhaji Yawale Sulaiman Sarkin Baki, two members of the state House of Assembly representing the area, Hon. Sa’idu Ibrahim Neno and Hon. Aminu Almustapha Boza, as well as candidate for Isa/Sabon Birni Federal Constituency of the party, Hon. Abdulkadir Jelani Danbuga, among others.

They all associated themselves with the new members into APC and assured them of equal treatment at all times.

Some of the defectors who spoke during the event, Alh. Mukhtar Gidan Zago, Alhaji Yahuza Tsamaye and PDP youth leader from Kurawa ward, Alhaji Lawali Kurawa, told the gathering that, they left PDP for APC to contribute their quota towards the victory of APC as PDP was not ready to fulfill the promises it had made to them.

Previous 2023: HOW MATAWALLE IS RALLYING ROUND THE NORTH WEST FOR TINUBU
Next Kebbi PDP set to receive presidential candidate, Atiku Abubakar