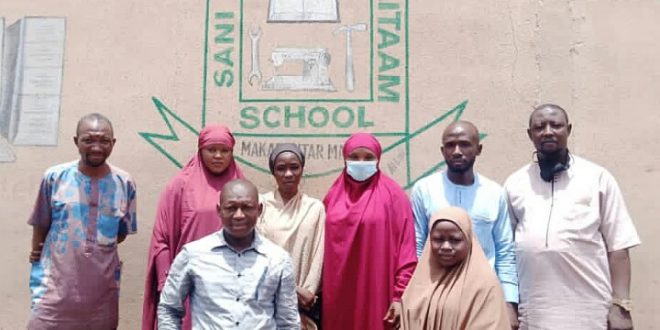 In an effort to meet the organisation’s goals and objectives of it association by supporting communities and less privileged, the group Gaskiya Dokin Karfe Foundation (GDKF), has distributed food Items to orphans and vulnerable communities in Kaduna State.

The Leadership of the association, which includes it members from various communities across the country, visited Kaduna and distributed relief items to some Rigasa communities and students of the SANI KURA AITAAM Orphanage school in Mu’azu Kaduna.

Speaking during the event, the group Second Founder, Malam Nuraddeen Danmari, AbuAfaaf-AbuArafat, said that the visit and the support they provided is one of the major objectives of the group in giving support to life and community, to alleviate suffering of the plight of some communities in the country.

He added that, the donation was a joint contribution made by the members of the association, while done every year during the holy month of Ramadan, and that Kaduna State was not the only place where they expected to visit.

He said, “Many associations have their own policies and procedures to help orphans during this month of Ramadan, which is why some of us have traveled from other cities to meet for this visit and to give our support.”

AbuAfaaf, further explained that the visit and the support they brought was a great deal to them, because they do so every year hence they want to make the communities happy, most especially the orphans, for the sake of God’s salvation and mercy for their tomorrow.

The Founder, Nuraddeen Danmari, advised other communities, associations to make every effort to support orphans wherever they are because they have no greater privilege than such kind gesture support that most organizations and other communities can provide to ensure that they are placed in a happily mode even if it is just with a datepalm.

While reacting to kind gesture, Comrade Yahaya Hussaini, the former principal of the Orphanage School, described the visit and the donation made by the group as a source of pride and joy has it was a sign of the association good intentions.

He added that, the school has been existence for almost least 15 years with the aim of supporting orphans whose parents are not privileged to take care of their education, and the founder of the school, Alhaji Ahmad Sani Kura, has being doing his best to make sure that everything is done accordingly including other services related to paying teachers dues and supporting the community.

He said, “This school was opened with just 49 students in 2006, and we are now having at least 227 students all of whom we teach at the primary level, and by God willing we hope to establish a secondary section soon so as to further develop the educational program for orphans and the poor. ”

Finally, the Principal Comrade Yahaya thanked the members of the association for their good intentions and dedicated efforts in showing their commitment to the lives of orphans around the world, while wished and prayed for them with other well meaning Nigerians, especially those who have the same goals and aspirations towards the lives of Orphans.