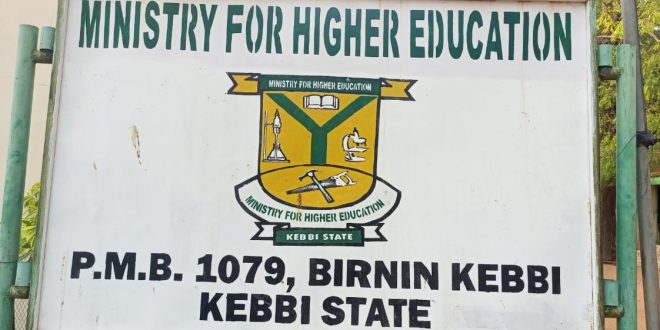 The Kebbi State Governor, Senator Abubakar Atiku Bagudu has approved foreign training programme of two hundred and sixty two students of the state to study medicine and engineering courses, in India, Ukraine and Sudan.
In a statement Signed by  YAHAYA SARKI,
Special Adviser (SA) Media to Kebbi State Governor, made available to news men revealed that.
The Governor has also approved a total of one million, sixty thousand and seven hundred dollars for the programme to cover for tuition fees, accommodation, feeding and modest pocket money.
This was announced by the Kebbi State Commissioner for Higher Education, Professor Mukhtar Umar Bunza in Birnin Kebbi on Thursday.
He said that in addition to that, approval has been given for an expenditure of three hundred and forty-five million naira to cater for logistics, including international and local air fares, visa processing fees, police screening, crime-free certification, drug-free certification and verification from Foreign Affairs Ministry.
Professor Mukhtar Bunza explained that all such processes must be completed before approval could be granted for foreign travel.
He made it clear that out of the two hundred students who have undergone clearance process, only four students were having inquires on their results.
The Commissioner added that fifty Six students of the total number would study medicine while others would study Para-Medicals and Engineering Sciences, which were not available in the state such as Radiography, Radiology, physiotherapy, Water Engineering and Quantity Survey.
Professor Mukhtar Bunza highlighted that arrangement have already been concluded with the embassies of India, Ukraine and Sudan under which Kebbi State Government would pay full costs of sponsorship of the travelling students direct into the accounts of the foreign universities concerned in order to ensure transparency.
The Commissioner further said that the National Commission for Colleges of Education, NCCE, has granted approval to Adamu Augie College of Education, Argungu, to begin degree programmes in affiliation with Usman Danfodio University, Sokoto.
Likewise, the National Board for Technical Education, NBTE, has given permission to the College of Nursing Sciences and Midwifery, Birnin Kebbi to commence the award of National Diploma, ND, and the Higher National Diploma, HND to graduating students, he said.
Professor Mukhtar Umar remarked, that such monumental achievement was as a result of commitment of Governor Abubakar Atiku Bagudu to educational development through intensive and extensive investment in the sector.
He said that the regulating authority has accredited all programmes offered by the Adamu Augie College of Education leading to the award of degrees while similar accreditation was secured for courses of the College of Nursing Sciences for the award of HND.
In the same capacity, more than thirty three programmes of the Kebbi State University of Science and Technology, Aliero, have received full accreditation from the National Universities Commission, NUC.
According to the Professor ‘about one hundred million naira was expended on the accreditation exercise of the three tertiary institutions as approved by Governor Abubakar Atiku Bagudu ‘.
Professor Mukhtar Umar Bunza, thanked the Governor for his resilience in educational growth of the State, praying Allah to reward him abundantly.
The Permanent Secretary in the Ministry Hajiya Halima Boyi Dikko, and other top officials, attended the news briefing addressed by the commissioner.
Share