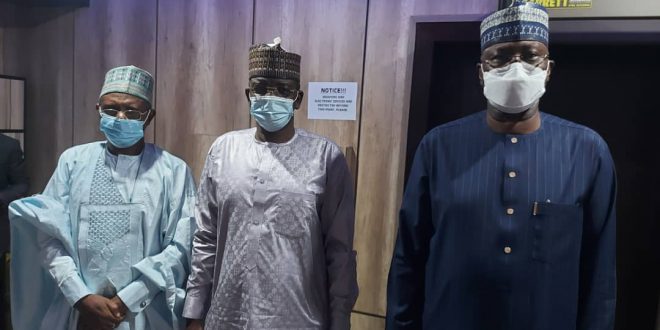 In a statement Signed by YUSUF IDRIS GUSAU
Director General, Media, Public Enlightenment and Communications to the Governor made available to journalist revealed that.

The visit centred on how to fill the state’s quota with genuine indigenes of the state at the federal level in accordance with provisions of the federal character in all federal government MDA’s and other political appointments.

The visit also discussed the Covid-19 strategy on best ways to curb the spread of new wave virus in Zamfara state in particular and the nation at large.

Governor Matawalle who observed that Zamfara State indigenes were left behind in terms of federal government appointments and strategic positions compared to other states in the country solicited for the filling of the gap as provided by the Federal Character.

He commended the simplicity and visionary leadership style of Mr. Boss Mustapha whose accommodative nature provides a lot of opportunities to many people in the country.

Responding, the SGF, Mr. Boss Mustapha thanked Governor Matawalle for the timely visit and assured to fix Zamfara indigenes in all the federal government MDAs in order to contribute their quota for national building and development.

He also commended the governor’s effort in uniting members of the APC in the state describing it as one of the main signs of development and urged him to sustain the tempo.