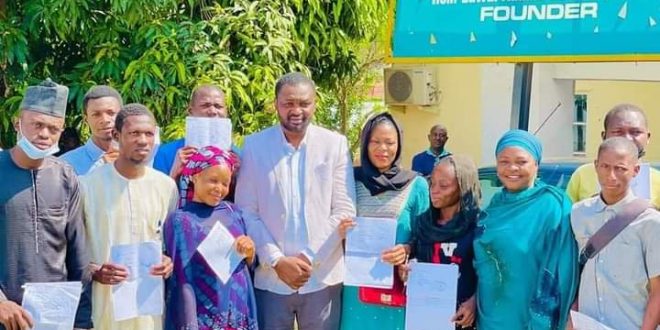 In his determination to ensure students from poor background complete their studies, Hon Lawal Adamu popularly known in political circles as Mr. LA has dolled out over 10 million naira on school and tuition fees for yet another batch of over 100 students studying in various tertiary institutions across Kaduna State.

While presenting receipts as proof of payment to beneficiaries carefully selected from seven local govt areas of Kaduna Central Senatorial zone to ensure only students from less privileged homes benefitted from the scholarship, Mr LA revealed that the program would be a routine exercise to contributing his quota towards the education of the masses, particularly the downtrodden.

He described plights of students in Nigeria as frustrating due to exorbitant fees charged for fees and tuition, calling on individuals and corporate organizations with financial muscles to support the education of the poor so the gap he said existed between children of the poor and the rich could be bridged for the interest of peace, unity and progress of the society.

The PDP chieftain stated that his passion and concern to see an educated society informed his decision to embark on dolling out resources to see that underfunded students were not withdrawn from schools on account of non-payment of fees, which he pointed out had cut short the studies of several young men and women who were willing to be graduates, secure good jobs and advance the cause of a better Nigeria.

The PDP candidate in 2019 Kaduna Central Senatorial election expressed dismay at unending hike in cost of education in higher institutions, particularly in Kaduna State under the leadership of the present administration, describing the development as sad and capable of depriving children from poor background from accessing formal education, which according to him would worsen the already bad security situation experienced across Nigeria.

“An idle mind is the devil’s workshop according to a wise saying which best describes the high rate of crime and other forms of antisocial behaviors amongst our youth majority of whom have been overwhelmed by lack of focus and blueprint on how to provide affordable but quality education to our teeming population.

” It is a timed bomb our policy makers are toying with in their hands if they continue to feign ignorance and pretend all is well with our youth.

” It’s not surprising that governments could not overcome rising and overwhelming insecurity situations in the country today because they have failed to address the root cause of the problem mainly due to the fact that their children school abroad.

” We must be proactive and be seen to be committed to improving lives of the people around us instead of paying lip service at workshops and public fora with no corresponding action to implementing measures suggested, ” he lamented.