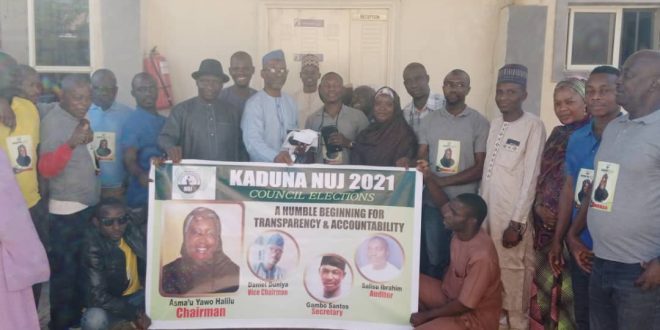 NUJ Election: I was Disqualified But Reinstated By National – Head of Operation Freedom Radio

A veteran broadcaster and head of operation Freedom Radio Kaduna, Abubakar Jidda Usman has added his voice to the raging debate arising from screening of aspirants contesting NUJ Kaduna Council election, saying the National leadership of the Union should have the final say on qualification or otherwise of candidates standing for election.

He made this known while receiving would be Chairman of NUJ Kaduna
Comrade Asma’u Yawo Halilu and members of her team, comprising Daniel Duniya, Santos Gambo, vice Chairman and secretary contenders respectively.

Jidda, who revealed that he was a Chairmanship aspirant for Kaduna NUJ election in 1995 but was disqualified, adding that National leadership of the Union had to reinstate him to take part in the race.

The veteran broadcaster explained further that constitutional provisions guiding conduct of election were explicit in reserving final review of decision of credential committee with the apex body of the Union in Abuja, stating that there would have been no need for the heated argument by the umpires of 2021 exercise.

“The National leadership had to declare my disqualification null and void after reviewing my case because I was unduly and unconstitutionally treated by the then credential committee.

“Though, I later stepped down for Kajuru who later won the election and emerged chairman Kaduna Council NUJ.

“I must commend doggedness, passion and zeal of next Chairman of the council, I learnt she is now unopposed which I consider to be a welcome development for the unity of all members,” he said.

Jidda urged Asma’u and her team to hit the ground running by ridding the profession of quack elements parading as journalists as soon as she assumed Chairmanship of the council on 18 December 2021, pointing out that unqualified practitioners were giving the noble profession a bad name.

In her remarks, Comrade Halilu said she was at the broadcast outfit to show her appreciation for the unflinching support and solidarity she had been getting from the Freedom Chapel, pledging to make a top priority issues of welfare of all members of the Union and carry along stakeholders in decision-making process of her administration.