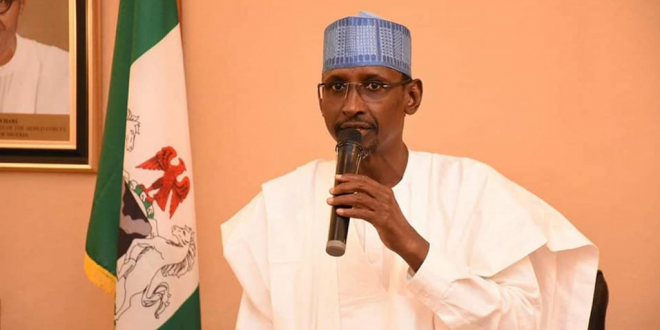 Bello spoke on Monday when he declared open a two-day Symposium on the Imperatives of an NYSC Trust Fund, which has as its theme: ” Consolidating the Gains of the NYSC in Youth Empowerment and National Development in the Face of Curent Economic Realities: The Imperatives of a Trust Fund.”

Bello, who was represented by Mrs Asabe Umar, Director, Youth, Social Development Secretariat, Federal Capital Territory Development Authority (FCDA), added that, the scheme can do this especially through the empowerment of its teeming youth, given the budding talents at its disposal.

The minister stated that NYSC is one of the most cherished national institutions bequeathed to the country to foster unity,integration and national development after the unfortunate civil war.

” Over the years however, the realization of the objectives for establishing the scheme have been hampered by myriad of challenges.

” They include: funding, provision of infrastructure and lately  start up capital for corps members trained through the NYSC Skills Acquisition  and Entrepreneurship Development Programme,”the minister, averred.

Bello commended the management of the scheme for rising to the occasion to address the challenges facing its operations, throughthe proposed NYSC Trust Fund.

Also speaking, the Minister of Youth and Sports, Mr Sunday Dare said that NYSC has continuously lived up to the dreams and aspirations of its founding fathers.

Represented by Mr Despan Kwardam, Assistant Director,  Youth Rights and Leadership added , ” this is evidenced by the numerous achievements  of the scheme, though has not come without challenges.

”  Over the years, the NYSC has grappled with challenges  which hamper its operations .

” This made it necessary to fashion ways for sustaining the schene to contribute more to the development of the nation.

” Therefore, the the proposal for the establiof an NYSC Trust Fund is a step in the right directiin.

” If established, it is expected to bridge the financial deficit of the schene empower all corps members for self reliance.

” This is by providing start up capitals to set up their businesses on the skills acquired during the service year,” Dare, added.

The Director-General of NYSC, Brig.-Gen.Shuaibu Ibrahim said that the idea of the Trust Fund came up, ” while deepening the search for ways of addressing challenges faced by the scheme.

” I am confident that this symposium will result in further support for the proposal by all stakeholders.”

Ibrahim further noted that the federal government bears the heavier cost of running the scheme.

The DG added: ” This is through feeding, medical services for corps members and course officials during the orientation course, provision of other logistics for orientation and post orientation operations.

” Others are; the payment of corps members’ monthly personal and transport allowances, provision of kits, insurance of corps members, as well as staff welfare and training.”

Ibrahim stated that, the fund, which will be called: ” National Youth Service Corps Trust Fund  ( NYSCTF),” is expected to strengthen the operations of the scheme.

He said:” The fund will help address infrastructural and other logistic needs for the smooth conduct of orientation courses.

” It will bolster the provision of corps lodges and transit camps, as well as other essential facilities for the welfare of the corps members.

” In addition, resources from the fund will support staff training for higher productivity,as well as logistics requirements.

” These include special aspects of our Community Development Service such as medical outreaches conducted under the NYSC Health Iinitiative for Rural Dwellers, among others .

The symposium which ends tomorrow, with various papers billed to be presented by various University Dons.