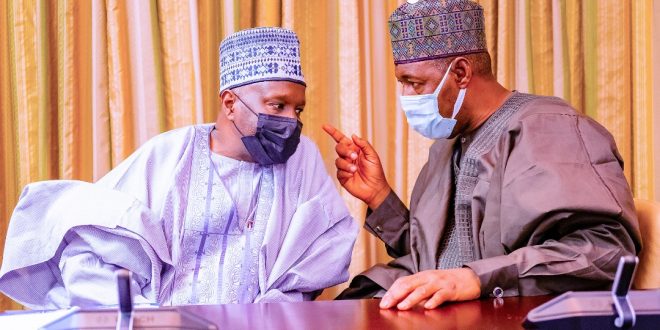 … Buhari wants urgent result, VP says
The Vice President, Professor Yemi Osinbajo on Monday, chaired inaugural meeting of a Presidential Committee on the Repatriation, Return and Resettlement of Displaced Persons in the North-East, which was recently constituted by President Muhammadu Buhari to facilitate safe return of displaced Nigerians mostly from Borno and other states in the North-East.
Buhari had appointed the Vice President as chairman while Borno State Governor, Professor Babagana Umara Zulum, serves as vice chairman.
Zulum alongside Gombe State Governor, Alhaji Muhammad Inuwa Yahaya; deputy governor of Yobe State, Alhaji Idi Gubana; and Chief of Staff to the President, Prof. Ibrahim Gambari, as well as the NSA, Services Chiefs and Inspector General of Police were among participants at the inaugural meeting, which held at the Presidential Villa in Abuja.
The committee is to return both internally displaced persons and those who fled Cameroon, Niger and Chad, majority of them from communities in Borno, Yobe and other parts of the North-East.
Laolu Akande, Senior Special Assistant to the President on Media & Publicity in the office of the Vice President said in a statement released on Monday, that “on the task ahead of the committee, Prof. Osinbajo urged members to carry out the assignment with every sense of urgency, noting that the President wanted a committee with wide representation in order to be inclusive, and to be able to deliver, taking to account all the issues”.
He added that Professor Osinbajo told members of the committee to regard their tasks as “an emergency” for which there is no time “to get into too much bureaucracy so that we are able to deliver on all of the issues.” 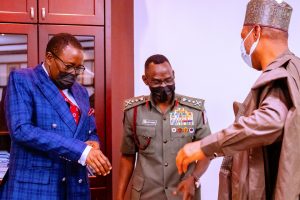 “We should immediately do whatever it takes to commence the process of repatriating our people back home. Already there are several initiatives. We need to deal with all of that working as quickly as possible to achieve the terms of reference and of course, ensure that all other initiatives continue to run in the way that they are designed to run”, the Vice President was quoted by Akande.
The statement added that Osinbajo assured of active collaboration between all stakeholders towards “a hitch-free repatriation exercise” noting that “there is no reason why we cannot return our citizens to their homes.”
Akande noted that the Vice President directed the committee’s secretariat to constitute three technical working groups on a work plan, repatriation exercise and on dealing with repentant Boko Haram combatants.
The committee, the statement added, will meet later to assess progress of work.
The inaugural meeting was attended by Ministers of Justice, Abubakar Malami; Foreign Affairs, Geoffrey Onyeama; Humanitarian Affairs, Disaster Management & Social Development, Hajiya Sadiya Umar Farouq; Defence, Maj. Gen. Bashir Magashi (rtd) and National Security Adviser, Maj. Gen. Babagana Monguno (rtd). Others included the Chief of Defence Staff, Gen. Lucky Irabor; Inspector General of Police, Usman Alkali Baba; Director-General, State Security Service, Yusuf Bichi; Chief of Defence Intelligence Agency, Maj. Gen. Samuel Adebayo; and the representative of the Director-General, National Intelligence Agency, Ahmed Rufai Abubakar.
The meeting also had representatives of the North-East Development Commission (NEDC) and the National Commission for Refugees, Migration & Internally Displaced Persons, Akande explained in his statement.
Share