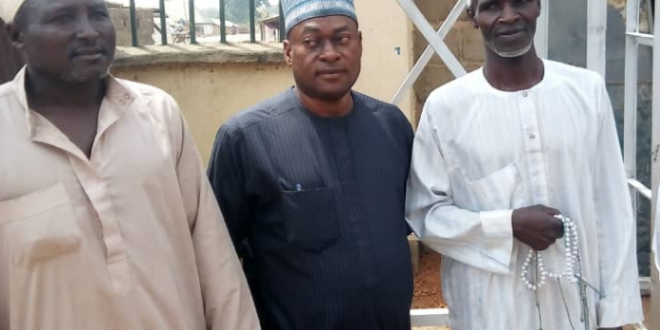 In an effort to promote peaceful coexistence in southern Kaduna a son of a Reverend drill/sink Borehole in a central mosque.

A son of a Reverend and an Engineer by profession, Engineer Dauda Tawani has drill a Borehole worth millions of naira in a central mosque at Fadan kamantan,in Zangon kataf local government area of Kaduna state.
Speaking at the commencement of the drilling in Fadan kamantan , the District Head of Fadan kamantan,Mr Sama’ila Tawani,said the project will promote more love and peaceful co- existence among Muslims and Christians in the area.
He said the project which is been executed by TAWANI FAMILY FOUNDATION was sponsored by Engineer Dauda Tawani,a son of the soil.
.The District Head added that the execution of the Borehole was part of an effort to remember the legacies of their late father who is a Reverend and also to enhance brother hood among Muslims and Christians in the area and the state in general.
Mr Sama’ila Tawani said the Borehole would alleviate the scarcity of water in the mosque during the five daily prayers.
In a remark, the chief Imam of the mosque, Imam Rilwanu Isiyaka Fadan kamantan , express happiness and joy over Borehole,adding that, it’s signifies love and togetherness.
Imam Rilwanu Isiyaka said for a non Muslim to sink Borehole worth millions of naira in a central mosque in Zangon kataf local government area is something that is wonderful and blessed by the Almighty Allah.
The chief Imam called on wealthy individuals to emulate the good gesture of Engineer Dauda Tawani and promote love and peaceful coexistence in southern Kaduna.
Also Speaking, the Sarkin Hausa of Fadan kamantan,Mallam Ahmed Adamu Garba describe the Godly gesture as wonderful and pray for more blessing to the donor, Engineer Dauda Tawani.
He said for years, they have been facing the problem of water scarcity,but Allah in his mercy use a non Muslim to solve the problem
He pray for Allah’s blessing and more understanding to both Muslims and Christians in the area.
The sarki who commended the donor said for sure ,it will enhance more love and peaceful coexistence in the area.
In short remark the donor, Engineer Dauda Tawani said he decided to sink Borehole in the mosque,in line with the commandments of the holy book which preaches love to humanity.
He said his late father who is a Reverend in a Baptist Church told them to love one another and promote peaceful coexistence among humanity.
He said  “loves peace,and want peace to always tend in his community and in the state and in the country at.large.
Engineer Dauda Tawani said this is part of his own efforts of giving back to the society.
Monmouth crowd of both  Muslims and Christians witness the drilling of the Borehole.
Some of them who spoke with newsmen express joy said it’s will promote peace, love and tranquility among them.
They commended the donor Engineer Dauda Tawani and urged other wealthy individuals to emulate his godly gesture.
Share