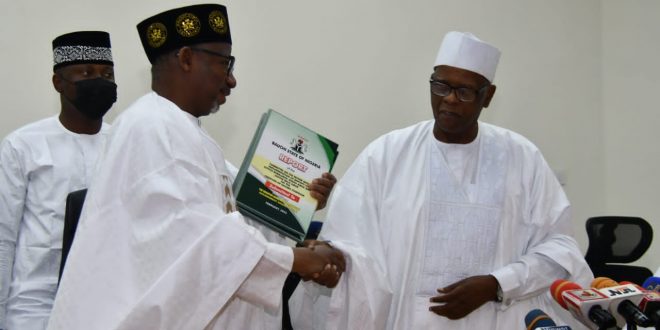 Governor Bala Abdulkadir Mohammed of Bauchi State on Friday evening declared the desire of his administration to put in place, a Sayawa Chiefdom that would be embraced by all stakeholders without resorting to litigation for peace to reign in Tafawa Balewa and Bogoro Local Government Areas.

The governor make it abundantly clear that, the state government has no prejudice for or against any of the parties involved in the tussle for the creation of Sayawa Chiefdom.

The governor made this known while receiving the report of the committee on the review and in implementation of reports of Justice Babalakin, Shehu Awak and Justice Bala Umar on the creation of Sayawa Chiefdom held at new Banquet Hall, Government House Annex Bauchi.

Governor Bala Mohammed said move by his administration is to broker peace among the various stakeholders and ensure peaceful coexistence among the heterogeneous ethnic and religious groups in the affected areas.

“The failure of the attempts by successive administrations in the State to create Sayawa Chiefdom and bring lasting peace to Tafawa Balewa and Bogoro Local out Areas prompted our Government to appoint this Committee to further investigate the lingering problem and came up with recommendations that would be acceptable to all stakeholders.

” From the address of the Chairman of the Committee, I have the feeling that the Committee has done a thorough job that would assist the Government the finding solution to the problem of creating the Sayawa Chiefdom once and for all.”

To this end, the governor said a White Paper Committee would be produced on the report after being deliberated upon by the State Executive Council an where the need arises, the state government would consult relevant stakeholders and experts on conflict resolution for advice and guidance.

Governor Bala Mohammed therefore assured the committee and indeed the god people of Bauchi State that the Committee’s report would be carefully studied by the government with a view to implementing the recommendations.

Presenting the report, the Chairman of the committee, Ambassador Jibrin Dada Chinade said the Committee recommended that the proposed Sayawa Chiefdom should comprise the whole of Bogoro Local Government area with proviso that non Sayawa within the Local Government would be allowed to decide whether or not they want to be part of the Chiefdom through referendum to be conducted by the State Independent Electoral Commission.

Ambassador Jibrin Chinade said the committee also recommended how the State Government would identify where the headquarters of the proposed Sayawa Chiefdom should be located.

“Our committee recommended that areas in Tafawa Balewa Local Government Area which are predominately occupied by the Sayawa should form part of the Sayawa Chiefdom.

However, referendum should be conducted in other areas of Tafawa Balewa Local Government who are not predominately Sayawa to decide whether or not they want to be part of the Sayawa Chiefdom.

“Recommendations have been made on the eligibility of persons to be appointed as Chief for the proposed Sayawa chiefdom, process of selection of the pioneer and subsequent chiefs for the Chiefdom and composition of Sayawa Chiefdom Traditional Council.

Appropriate recommendation has been made for the resettlement of persons displaced from Tafawa Balewa town as a result of the series of crises in the town.

” It is recommended that the subsisting 2014 law on the creation of Sayawa Chiefdom (as amended) should be further amended to accommodate the Committee’s recommendations.

To this end, a bill seeking for the amendment of the relevant sections of the law should be sent to the State House of Assembly for recommender action.”

The Chairman recommended that the state government should establish a Reconciliation Committee which should comprise neutral persons of proven intTheity to reconcile aggrieved parties and should in future ensure speedy investigation and prosecution of culprits to serve as deterrent to others.

“Since it is the wish of the Sayawa stakeholders that the proposed Sayawa Chiefdom should be called “Zaar Chiefdom” and the Chief Gung Zaar, the Committee has no objection and it is our hope that our recommendations would be useful in resolving the contentious issues that have militated against the creation of Sayawa Chiefdom and bringing peace in the Tafawa Balewa/Bogoro axis.”