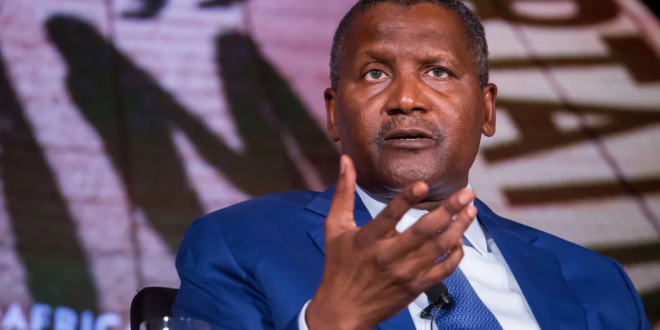 Dangote Is A Major Driver Of Peace In Nigeria – Defence Minister

With huge investments and job creation capacity, Dangote Industries Limited has been described as a major driver of peace and security in Nigeria.

Minister of Defence Bashir Salihi Magashi made this declaration Thursday when he visited the Dangote Pavilion at the ongoing 43rd Kaduna International Trade Fair.

The Minister who was represented by his aide Major General Ahmed Tijani Jibrin (Rtd) said the company has indirectly impacted security through job creation opportunities in the country.

Dangote is the second biggest employer of labour in Nigeria after Federal Government.

Dangote is the major sponsor of the ongoing Kaduna Trade Fair.

He said findings have shown that there is a relationship between economic condition and security, adding that Dangote Group is not only providing jobs, it’s also supporting peace and security in the country.

The Minister commended the company for making available products that would have been imported and thereby costing Nigeria additional foreign exchange.

Nigeria is reported to be one of the most terrorized countries in the world.

President Muhammadu Buhari, Governor Nasir Ahmed El-Rufai, and the organizer of the Fair, the Kaduna Chamber of Commerce Industry Mines and Agriculture (KADCCIMA, had said that they were encouraged by the yearly support and contribution of the Dangote Group to trade promotion in Nigeria.

Speaking on the sideline of the opening ceremony, the Director-General of Usman Saulawa extolled the relationship between the Dangote Group and KADCCIMA.

“Dangote Group is an international brand in the world of business and manufacturing. I can also add that it is a must-have in every home. Dangote is also known for its philanthropic activities through the Dangote Foundation,” he said.

He said one of the uniqueness of the 2022 Fair is the flagship event-the Business Round Table on Blue Economy where stakeholders and businesses are brought together.

A statement from the Corporate Communication Department of the Dangote Group said participants who seek to do business with any of the company’s subsidiaries can avail themselves of such opportunities through a Special Desk at the pavilion.

It described Kaduna State as one of its biggest markets in the country, given its historical position as the political capital of Northern Nigeria.