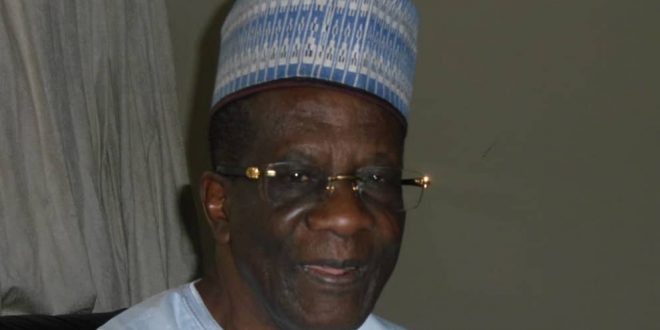 Political parties in the country have been enjoined to have a workable program to address the many restive issues bedevilling millions of youth in the country as a panacea to sustain our security and democracy.

An elder statesman and a seasoned politician, Alhaji Isyaku Ibrahim said in Abuja that, ” I have been a politician from pre to post independence Nigeria, what we set as an agenda was to improve the living standard of the people, especially the youth.

” But it is sad that the two major political parties have been rolling out plans and campaigning without disclosing what they plan for the millions of youth in their manifestoes. It is disturbing to me and likeminds considering the increasing number of our children and grandchildren who are employed.” He said.

The former strongman of the defunct National Party of Nigeria, NPN in the second republic said that he wants the political parties to be proactive and be sensitive to the plight of millions of unemployed graduates, skilled and illiterates who would increase the tension of insecurity in the country or to be frank, Nigeria is sitting on a keg of gun powder in the midst of abundant natural resources.

Alhaji Isyaku Ibrahim called on politicians to address the many issues bedevilling youth as the yardstick towards growth and development and stop making noise, ranting and beating around the bush with campaign rhetorics and face reality.

He similarly called on the youth to challenge politicians to tell them their plans for the youth before they support them in exercising their franchise respectively.

It could be recalled that recently, Alhaji Isyaku Ibrahim, Alhaji Alhassan Dantata and former Head of State, General Abdussalam Abubakar have called on the three tiers of government to address the issue of about 50 to 80 million unemployed youths in the country to improve growth and development now in a secured country and not otherwise, before it is too late.