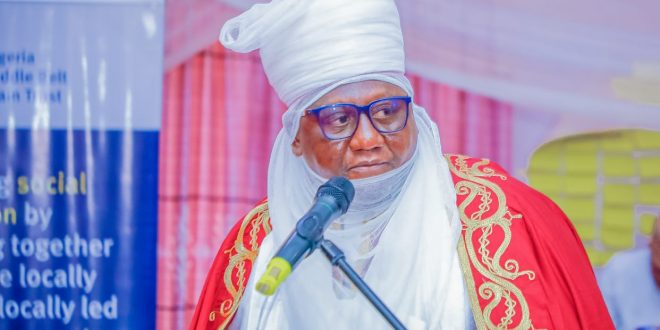 He proceeded to ABU Zaria and obtained Diploma in Law and LLB from Usman Danfodiyo University Sokoto 1996 and became a Barrister after finishing Law School Lagos in 1999.

In May 2004 he obtained his LL.M from the University of Dundee, Scotland, United Kingdom and Doctor of Philosophy (Ph.D) in Energy Law at International Islamic University Malaysia in 2014.

Dr. Shehu later left NUC to Nasarawa State University, Keffi, ( NSUK) as Lecturer I in 2011 and was promoted to Senior Lecturer in 2014 before ascending the throne as the 15th Emir of Keffi on 14th December, 2015.

The Emir has published many intellectual articles both Local and International journals and books in law, Politics and Administration.

According to him, “Decades ago, the next in authority in the Emirate after the Emir was the Alkali, so I had interest in becoming a lawyer to become a judge, Allah gave me the opportunity to study, I ended up as a lecturer and I have produced many lawyers, high court judges, lecturers, PhD holders amongst others.

” I was a very hard working person, I bid, won and executed contracts, engaged in trade. Any profit I make, I informed my father, the Emir Muhammadu Chindo Yamusa, of blessed memory, he will summon and tell me to bring it, he will say take this percentage and leave the rest and go, he will then distribute the money to those in need from far and near. It was hard to understand why he always did that, but with time I understood it was a royal training as I saw the wisdom later in life as many benefactors knew that I was the source of the funds they benefitted from through my father.

“I never knew I would become an Emir at the time it happened. It was a gift from Allah. I had five king makers out of seven who voted for me” He said.

He was receiving a plump salary in Exxon Oil, he resigned and came to Nasarawa State University, Keffi, (NSUK) and collected stipend as a lecturer, why? Emir of Keffi said, ” It was my father’s instruction to come back and serve the community. We don’t joke with our parent’s command. There was a wisdom coming back and being associated with the institution and it helped me immensely. I became so close to the youth, When I was lecturing, I assisted about 4,000 youth to secure admission through my office within a period of 15 years , I was a senior lecturer before I became the Emir.”

On how did he mustered the courage to tour (rangadi) the districts in your Emirate, while many could not due to insecurity? He said, ” I learnt this from my late father, from September to December, he hardly stays in his Palace, he went round his Emirate and spent two days in a village in an open court. The youth engaged in wrestling while the people bring food. But I go round and come back to my Palace and go to another District the following day.” He said.

The Emir was fearless, just like his great uncle, the legendary Magaji Dan Yamusa, he tamed an armed kidnapper called Buju Bazamfare to surrender his arms and accept to go straight to the Palace in the presence of the Governor Abdullahi Sule, then Commissioner of Poluce, retired AIG Bola Longe, former Director SSS in the state, Alhaji Shinkafi amongst other security officials recently.

Emir of Keffi said, “This is serious. Keffi is a Fulani settlement, because of that, several Fulani were attacked and I speak with their Ardos/Chiefs and extended an invitation for a dialogue in the Palace. When they brought him , I learnt that most of them were illiterates of Islamic and western knowledge, they have no sympathy for the people. I told him the implication of what he was doing. They should desist from armed banditry. I am happy that he laid down his arms several rifles, ammunition and dozens of his members to the former Inspector General of Police, Muhammad Adamu in Lafia.”

The royal father, before the ban on Almajiri system of education recently made headlines nationwide when has reduced the number of Almajiri, orphans and vulnerable thousands of children from the street and enrolled them in Islamic and Western school or Tsangaya system of education.

He said, “I noticed that for somebody to memorize the Quran, he will find western education easier. Some are orphans, they need support.”

The Emir of Keffi has been one of the few Royal fathers that have being representating the Sultan of Sokoto, Alhaji Muhammad Sa’ad Abubakar III at events, he is a fronline figure advocating for the support from the National Assembly for a constitutional provision for heads of traditional institutions.

The Emir said, “When we have our functions in the Constitution, we will be more effective, all Emirs and Chiefs are diplomats, we are closer to the grassroots, the people take our orders, we cannot function well, if we are not backed by the constitution.”

An Emir and a Diplomat have being fostering good relationship between other countries and Nigeria. He said, “Lady Atifete Jahjaga, first female and former President of Kosovo visited, she is a promoter of women participation in politics, women can perform very well. Sometimes we forget the religious and cultural aspect. Opportunity should be given to them to aid in the development of the country.”

He invited the Emir of Tsibiri from Niger Republic to visit the palace recently. “I first met him in Uganda for UNICEF program.

Participants were from Nigeria, Niger and Ethiopia. We met in Uganda for the purpose of good governance and to see how Kabaka is managing his school and university program. We became friends, exchanged phone numbers and kept in contact. Similarly, ” Alhaji Ibrahim Bilko who was the Governor of Dafur in Nigeria. was supported by Nasarawa State when they had famine, he visited my father and Abdullahi Adamu, the former Governor. The Emir visited but I will visit him very soon too In Sha Allah.”

An Emir and a Farmer, he said, ” I am a Farmer cultivating on a 100 hectares and I want to expand. I am a stakeholder in the zeal to feed the nation with enough food and when we surpass our target, we can export.”

The royal father has a message to the youth. “They should be law abiding, listen to their elders and they should go to school. If you are educated, it will help you to be modest. I advise them to uphold going to school. Respect elders, leader and abide by the rules and avoid drugs. I conducted drug awareness campaign. I invited hard drug dealers and told them that they should stop or the Emirate would report them to the authorities. In Keffi, we are struggling to establish drug rehabilitation center.”

On how the Lawyer and Lecturer remodeled the ancient Palace, ” I have been in this house for 40 years. The dream of my late father was to rebuild this palace. He had been sick for 25 years when he has money he goes to hospital abroad. When I became Emir, l contracted Architects and Engineers, I supervised Labourers who mould the block and we redesigned the Palace in five years. I will not stop paying back to the Emirate, the society, Nigeria, Africa and the world at large.” Said the Emir