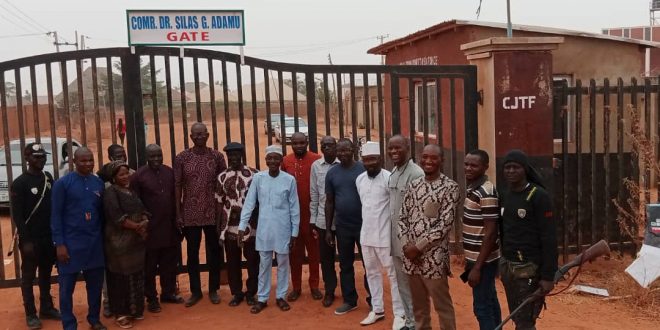 The Tsaunin Kura GRA Residents Association (Sabo GRA) as part of activities marking the one year remembrance of its late President General, Comrade (Dr) Silas Adamu, named the gate at the entrance to Zone D in the community after him.
Unveiling the name tag on Sunday, the Vice President General, Mr. Joseph Onoja said it was the least they could do to immortalize  a man that was a shinning light to the community.
Represented by the Sabo GRA Zone D  Chairman, Mr. Emmanuel Tagwai, he said unveiling the gate in his honour is the first in immortalizing Comrade Adamu, assuring that more plans are on.
Earlier, One year Remembrance Service for late Comrade (Dr) Silas Adamu, his wife, Mercy and daughter Joyce Kubai at ECWA Church Ungwan Muazu, Kaduna on Sunday March 13, 2022.
The tragic death of the trio occured on March 8, 2022, when they were involved in a ghastly car accident when traveling to Kaduna from Abuja.
Before his demise, Comrade Silas Adamu was the pioneer President General of the Tsaunin Kura GRA Residents Association (Sabo GRA).
He was also the President Atyap Community Development Association (ACDA) Worldwide and National Secretary, Medical Health Workers Union of Nigeria (MHWUN).
Ministering at the service while delivering the sermon, Reverend Obed told the family of late Silas Adamu that they should always put their trust in God Almighty for sustenance.
“Silas family be of good cheer. Whatever happens, it is not the end. When God opens your door, nobody will lock it, because God has unlocked it and he has the keys.
“God will make your names be mentioned where your father is not there to mention them,” he said.
Share