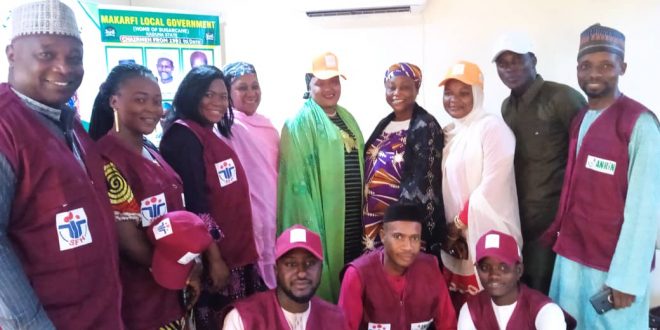 The Society for Family Health has sensitized and educate Communities
on good access to breast feeding among nursing mothers across the 23 Local Governments of Kaduna State.

Malam Muhammad Murtala Ibrahim the Project Director of the Society
who stated this at the world breast feeding Week for standard health living in society held at Makarfi.

He said, about five thousand and seventy five (5,075) people have benefited with the ongoing proactive measures to improved breast Feeding campaign in the state.

In her message, the wife of Kaduna State Governor Hajia Aishat Ummi Garba El-rufa’i, said Kaduna state Government in collaboration with Accelerating Nutrition Results in Nigeria (ANRIN) has committed to educate and Enlightened nursing mothers the significant of breast feeding for the eradication of malnutrition across the state.

She was represented by the State Project Manager Umar Usman Bambale at the World Breast feeding Week campaign in Makarfi.

In their separate remarks, a Nutrition specialist with the Kaduna state Ministery of health and Adolescents Aid health officer Hauwa Usman and Council Health Secretary Dr. Philemon Gebriel, said breast consist of 75 percent water out of 100% and urged residents always to remain in using what they have acquired on breast feeding for the healthy of their Children.

Also in her remarks, the wife of Makarfi Local Government Council Chairman Hajiya Fatima Kabiru Mu’azu Meyere charged nursing mothers, households to redouble their efforts on enlightening their wives on the important of breast milk to newly born babies at the first period of six months as directed by experts.