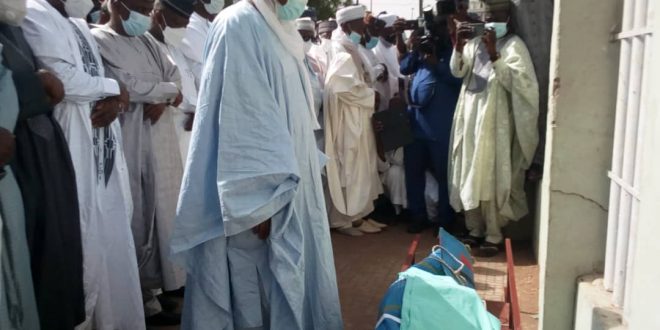 INNA LILLLAHI WA INNA ILAIHI RAJIUN. FROM ALLA WE CAME AND TO HIM WE SHALL RETURN. KULLI NAFSIN ZA’IKATUL MAUT, EVERY SOUL MUST TASTE. True to the above, every mortal ,must at the God’s appointed time exit this God farsaken world. Death is therefore the inevitable end of all us. May the Almighty Allah grant us a positive end from this world, when our time to exit this transient world comes. Ameen ya Hayyu, Ya Qayyum.

Instructively, Friday, April 23,2021,will remain indelible and unforgettable inthe minds of Nigerians as it was that day that ,the Almighty Allah called our Mother, Hajiya Aishatu Ahmadu Bello, to the great beyond at the ripe age of 75years. She was the eldest daughter of the legendary Sardaunan Sokoto and the Premier of the defunct Northern Nigeria. She was indeed a unique and Iconic Mother to the Blue-blooded Sage and Magajin Garin Sokoto, Sardaun’s grand son,Alhaji Hassan Ahmad Danbaba, the Chairman , Board of Directors of the Sokoto Rima River Basin Development Authority ( SRRBDA). The deceased indeed lived a life worthy of emulation and she came, she saw and she conquered . May the Almighty Allah grant her Aljannat Firdaus,Ameen.

The deceased died at a Hospital, after a prolonged battle with diabetes . Behold, it was grief and nothing but grief when the news of her death was broken to the world . Tears and tributes freely flew as multitudes of Nigerians, and others beyond the shores of the nation, irrespective of age, social status or gender ceaselessly mourned her death .it was indeed a great and irreplaceable loss of a Mother and Grand Mother to Nigerians. Her death provided an appointment reminiscence of the invaluable contributions of her late Father, one of the Founding Father’s of the modern day Nigeria, the renowned Sardaunan Sokoto, Sir Ahmadu Bello , Sardaunan Sokoto, the unbeatable Architect of Northern Nigeria and all the lasting legacies, therein. May the Almighty Allah grant him and all his dependable and able Lieutenants, Aljannat Firdaus. Ameeen.

The remains of late Hajiya A’ishatu Ahmadu Bello, the eldest daughter of late Premier of the defunct Northern Nigeria , Sir Ahmadu Bello(Sardauna of Sokoto), was on Thursday afternoon laid to rest, at the historic Hubbaren Danjada, Binanchi,Sokoto, according to Islamic injunctions.Late A’ishatu,who died penultimate Friday, in Dubai following complications from diabetis, was the Mother of the Magajin Garin Sokoto, Alhaji Hassan Ahmad Danbaba, the Chairman, Board of Directors, Sokoto Rima River Basin Development Authority(SRRBDA).

The late Hajita Aisha died on Friday, April 23, 2021, at a Dubai Hospital, at the ripe age of 75, after a prolonged battle with diabetes.She was the wife of the Chairman of the defunct Northern Nigeria Housing Corporation and one of the members,who represented Sokoto Province at the House of Representatives in the 1960s, Alhaji Ahmad Danbaba, Marafan Sokoto.

She is survived by five children and a younger sister, who is the last daughter of the late Premier and wife of the late Marafan Sokoto, Alhaji Umaru Aliyu Shinkafi.Among her children is Magajin Garin Sokoto, Alhaji Hassan Ahmad Danbaba and the wife of Ambassador Shehu Malami, Sarkin Sudan.

Commenting on her demise , the Senate President , Dr Ahmad Ibrahim Lawan, said that , the deceased lived a good and decent life .” Death is one of the phases in our lives and all mortals must taste it .Her death is a national loss .” We will miss her forever as she was a proud Mother to all Nigerians ,” he averred .

The delegation was led to the Binanchi Sokoto residence of the Mgaajin Garin Sokoto , the eldest son of the deceased, by Governor Aminu Waziri Tambuwal and his Deputy , Alhaji Mannir Muhammad DanIya.Professor Ibrahim Gambari said that , the delegation was in Sokoto, to heartily extend the greetings and condolences of President Muhammadu Buhari to the Magajin Garin Sokoto and family ,over the sad loss of a Mother and Sister .

Gambari described the deceased as a Personality in her own right ,and said that , her demise was a great loss not only to her family , to Sokoto State,but to Nigeria , in general .He beseeched the Almighty Allah to grant her Aljannat Firdaus and give herfamly , people of Sokoto State and Nigerians, in general , the formidable fortitude to bear the irreplaceable loss .

Responding, Ambassador Shehu Malami, Sarkin Sudan, said that , he felt privileged , honoured and proud to receive the all-important delegation ,on behalf of the family.The Sarkin Sudan of Wurno also solicited for more prayers, for the repose of the soul of the deceased .

Also speaking, Senator Aliyu Magatakarda Wamakko, representing Sokoto North Senatorial District, described the deceased as a Mother to all .He fervently prayed for the repose of her soul and beseeched the Almighty Allah to grant her Aljannat firdaus and give her family the formidable fortitude to bear the irreparable loss .

Also speaking , the Magajin Sokoto, Alhaji Hassan Ahmad Danbaba, commended President Muhammadu Buhari for the invaluable gesture .He said :” This has shown that he is a leader to all Nigerians ,” even as he described his late Mother as a ,” friend , mother , sister, brother and everything to me .”The Magajin Garin Sokoto also said that, the deceased was a beacon of piety , patience , peseverance and philantrophy , while she was was also a peace maker and a bridge builder.

The visitor were received by Senator Aliyu Magatakarda Wamakko, a former Governor of Sokoto State, a former Deputy Governor and Executive Secretary, Police Trust Fund, Alhaji Ahmad Aliyu Sokoto, the acting Chairman of APC in the state , Alhaji Isa Sadiq Achida , other party leaders and elders , as well as some Traditional and Religious Leaders, among others .

A prayer session for the repose of the soul of the deceased, was led by the Minister of Aviation , Alhaji Hadi Sirika .The prayer also centred on divine guidance and protection for President Muhammadu Buhari and other leaders , as well as for sustainable peace ,unity and socioeconomic prosperity of Nigeria.

The late Hajiya Aisha died on Friday, April 23, 2021, at a Dubai Hospital, at the ripe age of 75, after a prolonged battle with diabetes.She was the wife of the Chairman of the defunct Northern Nigeria Housing Corporation and one of the members,who represented Sokoto Province at the House of Representatives in the 1960s, Alhaji Ahmad Danbaba, Marafan Sokoto.She is survived by five children and a younger sister, who is the last daughter of the late Premier and wife of the late Marafan Sokoto, Alhaji Umaru Aliyu Shinkafi.Among her children is Magajin Garin Sokoto, Alhaji Hassan Ahmad Danbaba and the wife of Ambassador Shehu Malami, Sarkin Sudan.

Over a week after the demise of the late Hajiya Aishatu Ahmadu Bello, myriad of sympathizers have continued to troop to the Binanchi Sokoto residence of the Magajin Garin Sokoto,to condolence him on and the family on the demise of the deceased, at a time when her wise counsel and Motherly advice and care were direly needed.

Some of the earliest and latest visitors were the Kaduna State Governor, Alhaji Ahamd El-Rufa’i , as well as the Minister of Police Affairs, Alhaji Muhammadu Maigari Dingyadi. Indeed , thousands of mourners and sympathizers from within and outside Nigeria have continued to throng to the Seat of the Caliphate to register their heatfelt condolences to the highly bereaved Magajin Garin Sokoto and all the family members of the deceased, people of the state and entire Nigerians.

The death of the eldest daughter of the Sardaunan Sokoto, Gamji Dan Kwarai, Hajiya Aishatu Ahmadu Bello,nee,A’i, was really a sad and an unquatifiable loss not only to the Magajin Garin Sokoto, his family or Sokoto State,but, to the country , as a whole. As she exited this world in this Holy Month of Ramadan,1442 AH and and on a sacred day, Friday, May the Almighty Allah repose her soul and grant her eternal bliss,in Aljannatul Firdaus.Ameen ya Allah, ya Hayyu, ya Qayyum.

Previous The Students Released Are 27, not 29, As Reported By Some Nations Media – Parents
Next An Mika Daliban Makarantar Afaka 27 Ga Iayayensu