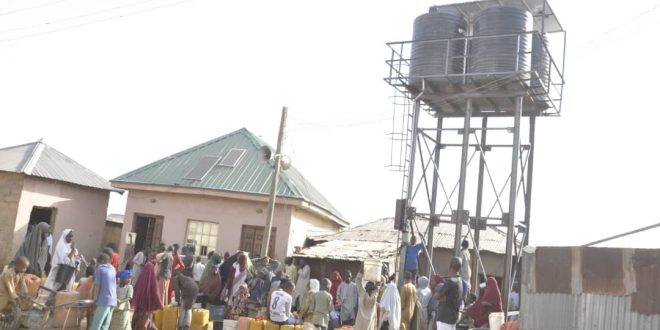 The Chairman of the Senate Committee on Defence and Deputy Chairman,  Senate Committee on Anti Corruption,  Senator Aliyu Magatakarda Wamakko,  has commenced the sinking of no fewer than  seventeen solar- powered boreholes in various parts of Sokoto metropolis and its environs . 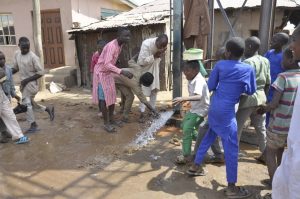 The project commenced last week, while water was already being fetched in some of the benefiting communities ,even without the completion of the ongoing installation of the other accessories of the boreholes.

One of such areas was Makerar Asaada, in Sokoto North Local Government,  where the elated residents had since put the borehole to proper use .

In the same vein, in some of the benefitting  areas, it was observed that, work was keenly ongoing, to ensure the timely completion of the project .

According to the Director of Administration to Wamakko, Alhaji Amustapha Abubakar Alkali, the Engineers executing the project will soon complete the installation of the necessary accessories in all the areas .

This, Alkali noted , was in the bid to enable the residents of the lucky areas to start enjoying the dividends of the all-important project ,saying, ” water is life.”

The other benefiting areas where work was ongoing include Sabon Birni , Kofar Marke, while the borehole had already been drilled in Dambuwa, with only the other accessories yet to be fixed .

Other communities visited include the private University being built by Wamakko, the North West University of Science and Technology , at Kalambaina, the Kalambaina main community , Girabshi, as well as Mabera, near Sheikh Musa Lukuwa Jumaat Mosque.

A cross section of the elders of the benefitting communities spoken to expressed delight with the intervention by the former Governor of Sokoto State.

They averred that, with the happy development, the perennial water scarcity which was hitherto bedevilling them will soon be history .

The elated residents while praying for Wamakko, who represents Sokoto North Senatorial District, also described him as a man of vision, even as they fervently pray for God’s guidance and protection for him .