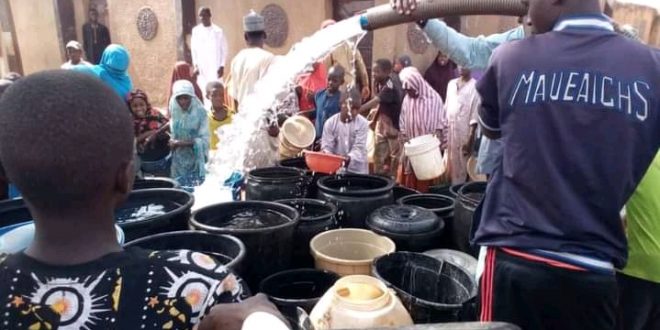 Water scarcity: Sokoto residents laud Wamakko for sustaining water supply
From Our Special Correspondent in Sokoto
As water scarcity bites harder in Sokoto metropolis and its environs , the residents of some communities in the city have commended Senator Aliyu Magatakarda Wamakko, representing Sokoto North Senatorial District, for sustaining water supply to them .
The residents were those of Kofar Rini, Masallacin Shehu, Assada and other adjoining communities have continued to praise Wamakko for ensuring his gesture reaches the nooks and crannies of the city .
This is contained in a statement signed by the Senior Special Assistant on Media and Publicity to   Wamakko ,Bashir Rabe Mani and issued to Newsmen on Friday .
According to them, the laudable gesture of the former Governor of the state had greatly alleviated their suffering, occasioned by the acute dearth of potable water from the State Water Board.
The elated residents, who spoke on the happy development, lamented how they had hitherto faced formidable difficulties in sourcing potable water before the commencement of the noble gesture by Wamakko .
” It was really a Herculean task for us to get water before Senator Wamakko began distributing the commodity to the various communities in the metropolis and its environs .
” This singular act of our former Governor had drastically reduced our hiccups and we are now getting potable water, courtesy of his magnanimity, ” they averred.
The Chairman of the Water Distribution Committee, Alhaji Anas Dan Nayaba stated that, the distribution was successfully conducted on Thursday at Maniru Road, Majema, Kofar Taramniyya, Kofar Atiku, Unguwar Mallamai, Gidan Haki, Assada and Masallacin Shehu.
According to Dan Nayaba,  the distribution exercise will on Friday, April 16, 2021, be conducted in all Jumaat Mosques in the city .
He said that,in all the areas so far covered , the residents were trooping to get potable water , especially with the ongoing Ramadan fast .
” The residents of all the benefitting communities were full of praises for Wamakko and they could not hide their elation,” the Chairman, explained .
Share