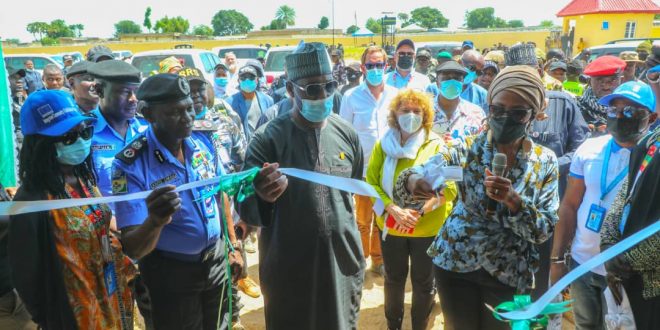 Borno State Governor, Prof. Babagana Umara Zulum alongside humanitarian partners were in Banki, a border town on Thursday, where N84m was distributed to 2,200 families who returned after fleeing from insurgent attacks. The funds is to enable the families engage in trading for their livelihoods, and to contribute towards reviving Banki’s economy.

During the visit, municipal offices that include Immigration, Customs, and Police posts towards restoration of civil authorities, were commissioned. 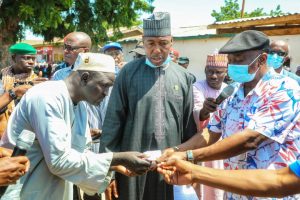 The livelihoods support and municipal office projects were executed by the Borno State Government through the UNDP’s regional stabilization facility (RSF). 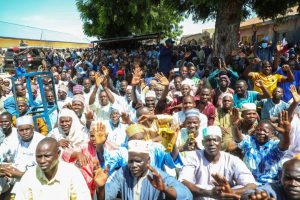 Governor Zulum moved to Banki after a multi stakeholder meeting attended by eight Governors within the Lake Chad, officials of the Lake Chad Basin Commission, multi national forces, among others, which held in Yaounde, with focus on security cooperation, stability, and economic recovery in the Lake Chad region.

Banki is a commercial town in Bama local Government area, which shares border with Cameroon.

The town was sacked by Boko Haram back in 2014 and Zulum who had been there at different times, has been making efforts to resuscitate the town with hundreds of shelters now built for returnees. 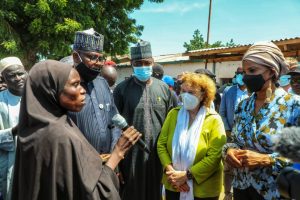 At Thursday’s visit, each of the 2,200 returnee-families received 40,000 naira to stimulate their local businesses.

Speaking at a brief ceremony, Zulum noted that the support was to help many residents who have completely lost their means of livelihood. He expressed delight that normalcy was fast returning to Banki town.

“We are here this afternoon to support communities of Banki through the regional stabilization facility. People of Banki have completely lost their means of livelihoods. Few months back, Banki was a ghost town” the Governor said. 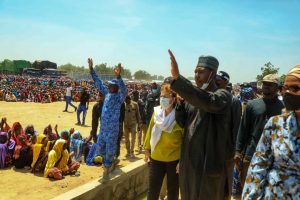 Governor Zulum said the support aims to indirectly impact on not less than 10,000 dependants of beneficiaries.

Zulum recalled that the first phase of the cash for livelihood support program was flagged off two months ago, during which each of the beneficiaries went home with N40,000 each.

After Zulum’s remarks, the UN Assistant Secretary General and UNDP’s regional Director for Africa, Ms. Ahunna Eziakonwa commissioned buildings for Customs and Immigration services, and a reconstructed Police Station and Barracks to enhance the restoration of the civil authorities in Banki.

Ms. Ahunna said, restoration of livelihoods and commercial activities across the border communities gives her joy, and assured their support to the Borno State Government towards bringing peace.

The UN Assistant Secretary General commended Governor Babagana Umara Zulum for his leadership and commitment in efforts to restore normalcy. 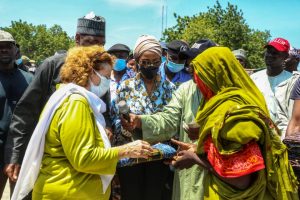 “I see hope in the faces of the people who are here. I see hope rekindled, I see energy and interest, and motivation to restart their lives. This gives me alot of joy, because development does not come from outside, it comes from within. I want to salute the Governor here for his leadership in supporting the restoration of hope and livelihood for this community. We are very proud to be supporting and coming behind the Governor to make life better and bring back hope to this community. We look foward to the next stage of the stabilization programme, and hope that we will really help end insurgency and bring peace to Borno State.” Ms. Ahunna said.

On her part, Director General for Africa at the German Ministry of Foreign Affairs, Ms. Heike Thiele said, “we have witnessed good progress towards stabilization today. The interventions under the Regional Stabilization Facility have not only contributed to the restoration of safety but have also helped strengthen the economy by enabling cross-border trade and movement”.