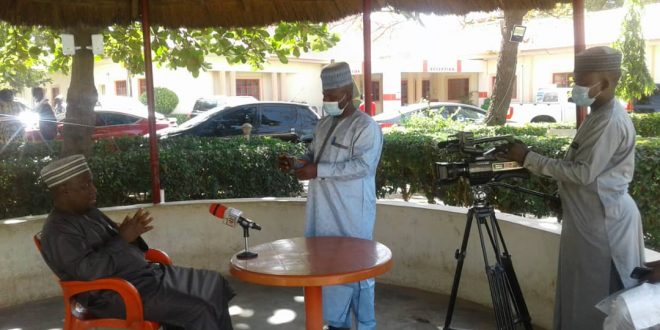 APC Registration/Revalidation Exercise hitchfree in Sokoto- Prof Kanam
The Chairman of the National Registration and Revalidation Exercise Committee deployed to Sokoto State from the National Headquarters of the All Progressives Congress (APC), Professor Saleh Galadima Kanam, says it was going on successfully across the state.
Kanam said :” So far, so good. The exercise is going on as planned, without any hitches , everything is going on smoothly.
” We have gone round the state and we are satisfied with the conduct of the exercise by all the officials and all those involved.
” We have also taken taken remedial steps to instantly resolve all observed problems and we are truly delighted .”
The Chairman, who was commenting on the exercise at the weekend in Sokoto also averred that, more than eighty per cent of the jobs had so far been successfully concluded.
He said ” The exercise is not aimed at protecting the political interests of any single individual or groups, but, to make the APC much more stronger and bigger.
” All the teething problems faced before the commencement of the exercise were amicably resolved and all the leaders , stalwarts and stakeholders of the party in the state have been giving the required support and cooperation.
” I am happy to say that, despite the initial hiccups, the party has emerged more resolute in ensuring the success of the exercise.
” I must therefore commend all the leaders and stalwarts for their awesome support and cooperation, as well as urge them to sustain the tempo.”
Kanam added that, the exerise was holistically being conducted in the state, with everybody being carried along.
The University further noted that, Nigerians were trooping into the APC sequel to the excellent tangible performances of President Muhammadu Buhari,in the last last six years .
He also acknowledged the sterling performances of all the elected and appointed officials of the party and submitted that, APC will reclaim it’s lost states in 2023 and even seize more states from the PDP, as well as other political parties.
” The party will emerge more formidable after the ongoing exercise and with the extant moves of resolving all internal crisee across Nigeria, APC is on the path of sweeping the 2023 polls, in Sha Allahu,” Kanam, declared.
Bashir Rabe Mani, Dan Masanin Mani,
Sokoto, Saturday, February 13,2021.
Share