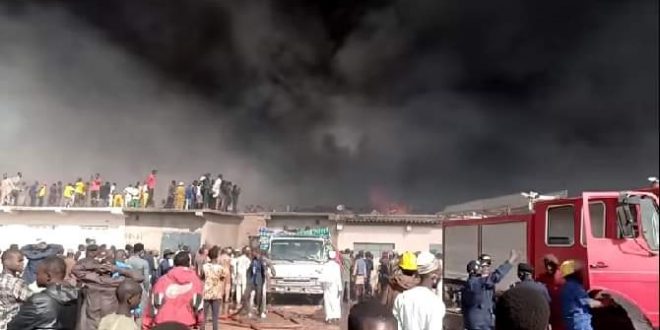 The Sokoto State Chapter of the All Progressives Congress ( APC), under its leader , Senator Aliyu Magatakarda Wamakko, on Wednesday, c ommiserated with the victims of Tuesday’s devastating inferno at the Sokoto Central Market .

In a statement Signed by Bashir Rabe Mani, Dan Masanin Mani,Senior Special Assistant, Media and Publicity,Senator Aliyu Magatakarda Wamakko, and made available to journalist revealed that

Senator Wamakko expressed rude shock at the extent of damage caused by the blaze, even as he said that, the inferno was divinely caused .

He mulled thorough investigations to unravel the remote and immediate causes of the blaze, with a view to prevent its recurrence .

Wamakko further beseeched the Almighty Allah to replenish the massive losses caused by the inferno.

He also condoled the victims on the losses of lives caused by the fire , while he prayed the Almighty Allah grant the deceased Aljannat firdaus.

The delegation was earlier received by the Director of Administration of the Sokoto Central Market, Alhaji Hassan Aliyu, on behalf of its Director General, Alhaji Maikudi Dogon Daji, as well as the Chairman of the State Chapter of the Youths Traders Association, Alhaji Bashiru Basha .

He lauded Senator Wamakko for the invaluable gesture , saying that , the extent of the damages was yet to be ascertained.

Special prayers for the repose of the souls of the deceased and for tge Almighty Allah to prevent the recurrence of the disaster were led by Sheikh Bashir Gidan Kanawa.