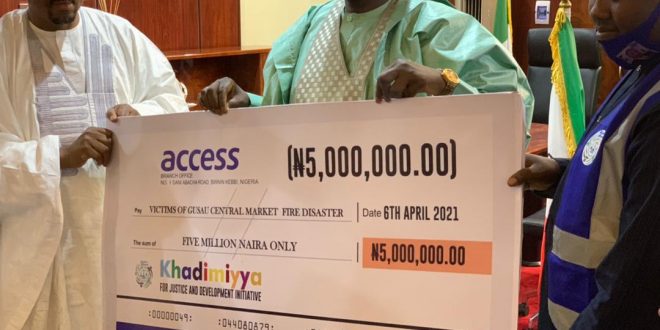 In a statement Signed by YUSUF IDRIS GUSAU Director General, Media Public Enlightenment and Communications. And made available to Journalist revealed that.

Governor Matawalle said Khadimiyya for Justice and Development Initiative is the only Non-government organisation that visited him and donated generously to the victims of the Tudun Wada market fire victims that destroyed over 60 shops which also affected many households among  the traders. 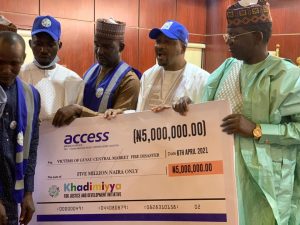 He further revealed that donation to the victims of any kind of desaster by an organisation such as Khadimiyya needs to be commended in order to encourage them to do more in that direction.

He also urged them to extend their Humanitarian work to the people affected by waves of banditry that have orphaned many children and made many married women widows especially in the northern parts of the country.

He said the organisation also needs to extend its area of support to education and health care especially to the orphans and less priviledged children in order to support government in that direction.

He thanked the organisation’s leadership for the timely and brotherly visit and assured of prudent utilisation of the funds by the assessment committee.

Earlier while presenting the cheque to the governor, the National Treasurer of the organisation, Alhaji Muhammad Bello Nasarawa said they were in Gusau to formally present their little support to the victims of Tudun Wada Gusau Market fire disaster in order to reduce their hardship and to commisserate with the government and the people of the state.

He described the fire desaster as an act of God and urged victims of the fire to accept it as a test in good faith as God will surely provide more for them.